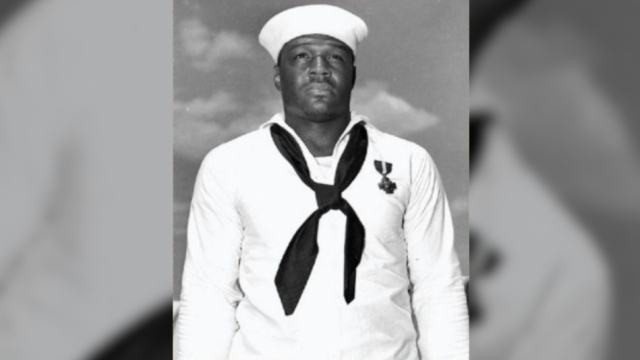 "It's my honor today to announce formally that our next Ford-class aircraft carrier CVN-81 will be named the USS Doris Miller," acting Secretary Thomas Modly said.

The acting secretary of the Navy, Thomas Modly, made the announcement on Monday during the "Martin Luther King Celebration for African American Heroes of World War II," where Miller's family unveiled what the ship will look like.

Miller is receiving the honor for his valiant efforts during the attack on Pearl Harbor.

Modly said Miller's story had "profounding, lasting impact beyond the Navy." Civil rights leader A. Philip Randolph cited Miller as inspiration in planning the March on Washington where Martin Luther King Jr. made his famous "I Have a Dream" speech in 1963.

The U.S. Navy shared a video commemorating Miller's heroism. He enlisted as a ship's mess attendant, or cook, in 1939, which was one of the few positions available to African Americans in the Navy. On Dec. 7, 1941, the USS West Virginia was attacked by Japanese forces. Miller helped save the ship's injured captain and then used a machine gun to defend the crew, even though he had never used one before. After the ship started sinking, he carried his injured shipmates to safety.

The video says, "It was clear that Miller's heroic actions saved the lives of many who would have otherwise died that day." Miller became the first African American to be honored with the Navy Cross in May 1942. The Navy says his actions were cited at the time as "an argument for civil rights and equality."

Miller remained in the Navy until Dec. 7, 1943, when a Japanese torpedo sank the ship he was on in the Gilbert Islands. He did not survive.

The U.S. Navy said: "While Doris Miller died in battle, his fighting spirit and legacy lives on. His name has come to be synonymous with heroism, bravery and selflessness. On behalf of the United States Navy, we salute you, Doris Miller, and will never let your story be forgotten."