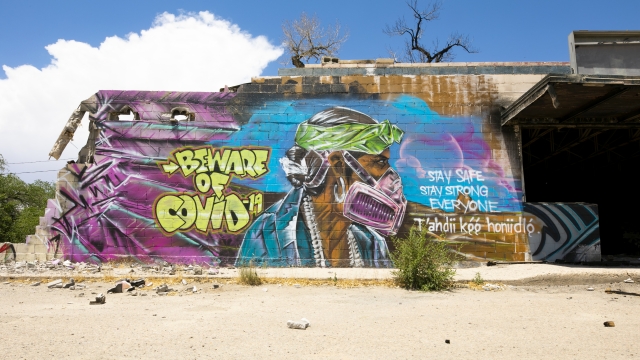 Down desert roads, spread out across mesas and mountains, the Navajo Nation is battling a COVID-19 outbreak unlike anywhere else in the U.S.

"So when we say we got hit hard, it's not an understatement at all. It is just been constant," said Dr. Loretta Christensen.

Covering more than 27,000 square miles across Arizona, New Mexico and Utah, the Navajo Nation is home to nearly 174,000 people. According to health officials, this population leads the U.S. with the most cases of infection per capita. Dr. Loretta Christensen, chief medical officer for the Navajo Area Indian Health Service, and her team have been working around the clock since the outbreak began.

"I think, per capita, we have one of the highest testing rates in the country. So when you test, you're going to get more results. And we know some of this is numbers that we're looking at. But, you know, when we look at our, our losses, each one is very meaningful to us," Christensen said.

Through contact tracing efforts, strict curfews and health orders, the nation has labored to counter rising case numbers since declaring a state of emergency on March 13.

Navajo Nation President Jonathan Nez says the underlying health issues that made it so susceptible to the virus have to be addressed.

"We need to begin to focus on taking better care of ourselves and those that are in that vulnerable population category," Nez said.

Health experts say the Navajo Nation, like many other Native American communities, has long struggled with rates of obesity and cardiovascular diseases — a problem that can be complicated by the distance many Navajo families are required to travel in order to access food, water and other resources.

"There are only 11 large shopping centers here on the Navajo Nation. It's 27,000 square miles of land, equivalent to the size of West Virginia. And so we are a food desert," Nez said.

Many families are left having to choose between traveling large distances or relying on local convenience stores and gas stations for groceries, where the foods can be less healthy.

Community advocate Loren Anthony is all too familiar with this fact of life on the nation.

"I remember times of traveling, you know, an hour and a half just to get food, just to do our laundry, just to do the basics," Anthony said. "We've been living like this for a long time, for many generations. And that's just the way of life. But now with this epidemic, it's impacted that way of life."

Through his organization, Chizh for Cheii, which delivers firewood to elders, Anthony and community members have pivoted to providing additional resources where they can so elders and their families don’t have to take as many trips to crowded stores in reservation border towns, where the risk of infection can be higher.

"A lot of people don't want to come into town. A lot of people are afraid of that. But when they do, you know, it's, it's scary, it's really scary to do that," Anthony said.

"Our farming community recognized the tremendous need to grow our own foods, now. And so we're doing exactly that," Yazzie said.

Yazzie says Shiprock plans to ask the Navajo Nation government to apply some of the $600 million it has received from the U.S. federal government through the CARES Act to "comprehensively revitalize" farm land along the San Juan River.

"Not in the way the big industry does, but to have many farms grow a lot of food and use our traditional ways of preserving food," Yazzie said.

However, those funds carry certain restrictions, which the Navajo Nation is looking to address in order to apply the funds to other areas so as to build a stronger future.

"We need better infrastructure, water lines, electricity, water lines to wash your hands with soap and water, as 30-40% of our citizens don't have running water," Nez said. "We also need to invest in education and scholarship. As we went through this pandemic, there are not that many Navajo doctors. Don't get me wrong. We appreciate all the non-Navajos that are here helping us. But I think it's time for us to grow our own."