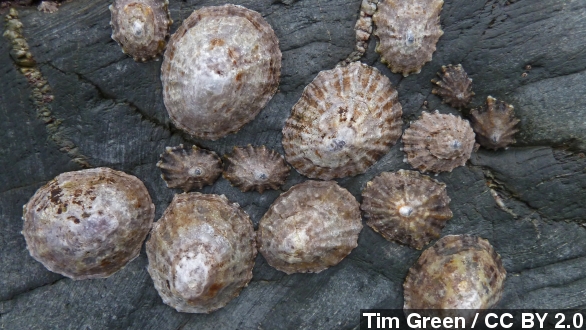 Researchers at the University of Portsmouth may have found the strongest natural material humankind has ever known.

And it's a ... sea snail. Specifically, it's a sea snail's teeth. Didn't see that one coming, did you? (Video via Horiba / Gaiapress Channel)

It's known as a limpet, a small aquatic snail with a distinctive cone-shaped shell.

Its teeth are so small, they had to be examined under a microscope. No matter the size of the limpets' teeth, they all had the same amount of strength.

The University of Portsmouth professor who led the study said that's a big deal:

"'Generally a big structure has lots of flaws and can break more easily than a smaller structure, which has fewer flaws and is stronger. The problem is that most structures have to be fairly big so they’re weaker than we would like. Limpet teeth break this rule as their strength is the same no matter what the size.'" (Video via BBC)

So, small, but really, really strong apparently. So strong, the material could be used to make the "cars, boats and planes of the future."

Limpet teeth have beaten out the previous record-holder for the strongest biological material found in nature: spider silk.

Researchers found the limpets' teeth contain goethite, which is a hard iron oxide mineral. The teeth also contain chitin, a stretchy fiber material that makes up for geothite's brittleness.

Scientists said the limpets need such high-strength teeth because they need to withstand the force of waves crashing against them as they cling on to rocky surfaces to eat when the tide is in.

The research was published in the Royal Society journal Interface.