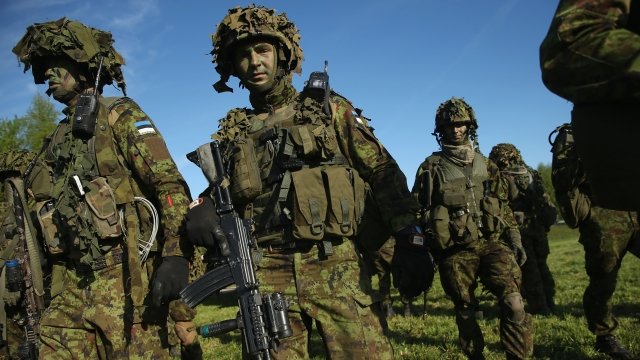 SMS
Don't Judge NATO Allies Solely By Their Spending Targets
By Matt Picht
By Matt Picht
July 3, 2018
NATO allies are supposed to spend 2 percent of their GDP on defense. But that benchmark might not be the best way to judge an ally's performance.
SHOW TRANSCRIPT

The NATO military alliance has been the cornerstone of Western Europe's defense plans for decades. But for President Trump, the alliance boils down to one number: 2 percent.

Trump reportedly sent stern letters to several NATO allies right before a major NATO summit in Brussels. The letters scolded countries that aren't spending enough on their defense budgets, according to The New York Times.

The alliance has no one to blame but itself — its members all pledged in 2014 to spend at least 2 percent of their GDP on defense. Most NATO nations are still pretty far from that target, something Trump's not happy about.

But there's more to a military force than its price tag. And that 2 percent benchmark isn't always the best way to measure which NATO allies are pulling their weight. 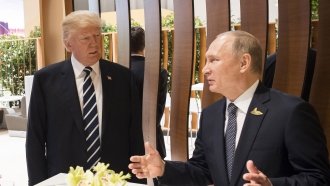 Take Greece, which has spent well over 2 percent of its GDP on defense for decades. The country's seen a sharp reduction in defense spending thanks to its 2009 fiscal crisis but still manages to keep its budget above the 2 percent level.

But for all that money, Greece has been lagging when it comes to supplying troops for key NATO missions. It's more focused on keeping its vast army employed and a decadeslong feud with fellow NATO neighbor Turkey.

And plenty of low spenders are more valuable than they seem: Italy spends just over 1 percent of its GDP on defense, but it boasts the third highest number of troops in NATO's Afghanistan mission, behind only the U.S. and Germany.

NATO itself has other benchmarks to measure ally contributions. For instance, it recommends allied countries spend about 20 percent of their defense budget on researching and acquiring up-to-date equipment. Twelve of the 28 NATO allies are meeting that goal, and several more are within striking distance of it.

And to measure how much bang NATO is getting for its buck, the alliance tracks how much of a country's land force can be deployed abroad if needed. A benchmark of 50 percent deployability was set in 2008.

NATO keeps its deployability figures secret, but 18 NATO members do report their stats publicly through the European Defense Agency. On average, NATO nations in that organization can muster 25.9 percent of their forces abroad as of 2014.

But no matter how you slice it, one thing stays constant: The U.S. is by far and away NATO's biggest contributor. So if Trump wants countries to stick to the 2 percent guideline, he's probably going to get it.