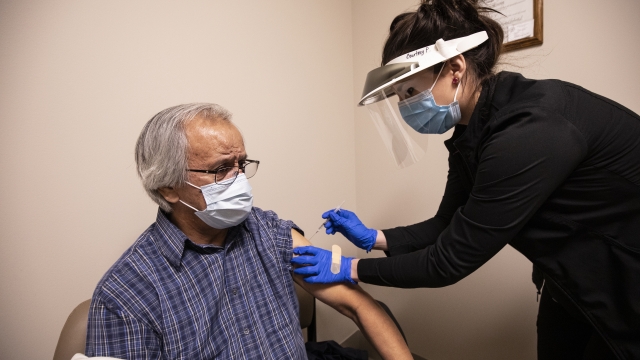 Tribes such as the Cherokee and Navajo Nation say they are working to quickly vaccinate native language speakers in an effort to preserve crucial ties to their heritage.

"When you lose a fluent speaker, you lose a life and you lose really, a national treasure," Hoskin said.

"A lot of those individuals in the 65 and over category, know the history, know the culture, know our way of life, teaching and of course, our language," President Jonathan Nez of the Navajo Nation said.

By vaccinating as many of their 2,000 native speakers as possible, Chuck Hoskin Jr., principal chief of the Cherokee Nation, says his tribe is able to protect their language and dispel mistrust in the vaccines.

"I think there's something about the position that they hold in people's hearts and people's minds that I think probably did more to build confidence than any elected official," Hoskin said.

Education on the virus and vaccines has remained a top priority for tribal governments. These efforts include live streaming vaccinations, biweekly town halls and operating call centers to schedule vaccinations and answer questions.

"We want the Navajo people to be informed on the vaccine," Nez said.

The biggest concern on the horizon now? Running out of vaccines to give.

"The fact that people keep asking me directly or indirectly, 'When is it my turn?' That's what we want. We want our citizens to be eager to get this vaccine," Hoskin said. "We'll have some explaining to do to our citizens if we don't have the vaccine."

"Not everybody wants it, of course, but there is some interest, a lot of interest in taking a vaccine," Nez said.

Nez says more than 50 percent of the vaccines doses his tribe has received so far have been administered. A far faster rollout than many states and a welcome sight for a community that has suffered disproportionately at the hands of this pandemic. Nez says any state letting vaccines sit in freezers should send them his way instead.

"If their people are not wanting to get that vaccine, then the Navajo Nation is willing to take those vaccines so we can get our people covered and safe from this virus because of what we've gone through for these 10 months," Nez said.