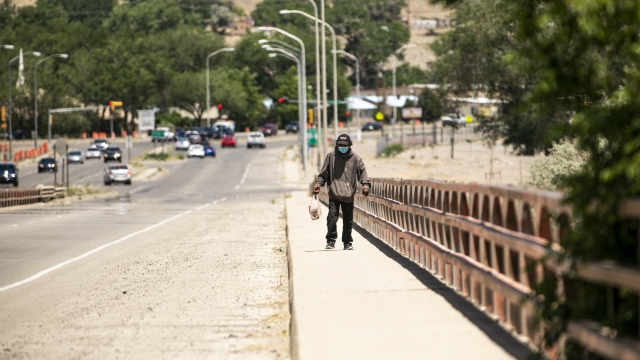 In the Navajo Nation and Native American communities across the U.S., COVID-19 is hitting hard.

According to the latest numbers from the Centers for Disease Control and Prevention, non-Hispanic American Indian or Alaska Native people have an age-adjusted COVID-19 hospitalization rate that is 5.7 times that of non-Hispanic White people.

On Wednesday, Native American communities called on Congress to address long-standing infrastructure problems on tribal lands that have hurt their ability to fight the growing epidemic.

In a remote hearing with the House Committee on Energy and Commerce, tribal leaders cited a need for assistance in filling voids in broadband infrastructure, health care systems and sanitation.

"These disparities have led to our vulnerability and the disproportionate impacts of COVID-19 to our communities both in terms of our infection rates and rate of death," Fawn Sharp, President of the National Congress of American Indians said.

The problems are especially acute in the Navajo Nation.

Since confirming its first case of the virus in March, the Navajo Nation has documented some of the highest rates of infection in the U.S., with roughly 8,000 confirmed cases as of July 7.

"As a result of the chronic underfunding of Indian programs which was mentioned earlier, tribes were not equipped with prompt and adequate resources to respond to COVID-19," Nez said.

Nez is now calling on Congress for urgent help with the broadband and electricity problems, and for help cutting through bureaucratic delays.

"Red tape is as much to blame as funding. It takes anywhere from one to two years to get the necessary approvals for infrastructure," Nez said.

The Democratic coronavirus relief bill known as the Heroes Act would provide $20 billion to tribal nations to help deal with the epidemic, but the bill, which passed the House in May, is now stalled.