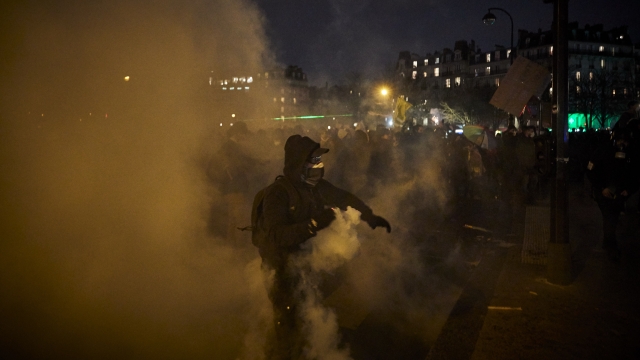 SMS
Thousands March In Nationwide Protest Over Pension Reforms In France
By Alec Larson
By Alec Larson
January 9, 2020
​The protest is aimed at a proposal by Macron to unify France's 42 pension schemes into a single points-based system.
SHOW TRANSCRIPT

Tens of thousands of demonstrators marched across France as teachers, doctors, and lawyers joined a fourth day of nationwide protests and strikes against Prime Minister Emmanuel Macron's proposed pension reforms.

As the government and trade unions moved forward with negotiations over the reforms on Thursday, street protests were staged in Paris and numerous other cities across the country. Meanwhile, railway strikes that began on Dec. 5 continued into their 36th day.

The interior ministry estimates that nearly 452,000 demonstrators nationwide took part in the protests, with the Paris march drawing nearly 56,000 people. Police in Paris said at least 24 had been detained as of Thursday afternoon, following a series of clashes between demonstrators and the authorities.

The protests are aimed at a proposal by Macron to unify France's 42 pension schemes into a single points-based system, as well as raise the full retirement age from 62 to 64. Unions argue that the reforms would force people to work longer for lower pensions.

Moving forward, a new round of negotiations focused on the financing of the pension system have been scheduled for Friday, while another nationwide demonstration has been called for Saturday.