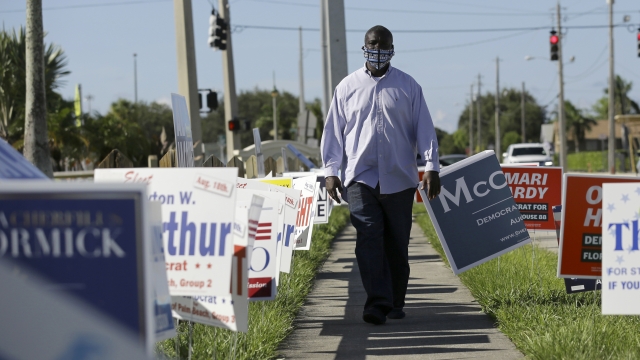 SMS
Nationwide Support Helps Ex-Felons in Fla. Vote This November
By Jamal Andress
By Jamal Andress
September 22, 2020
Millions of donation dollars are headed to Florida to combat a state law that requires ex-felons to pay back all fines and fees before they can vote.
SHOW TRANSCRIPT

One of the most important and biggest swing states in the country injected nearly 1.4 million potential new voters into the electorate in November 2018.

By passing a referendum, Amendment 4, to give former felons the right to vote, Florida issued the largest expansion of voters since the Civil Rights Act.

Now, less than two months before election day, a federal appeals court judge has ruled in favor of a Florida law that requires former felons to pay back all fines, fees and restitution before they can vote.

"That's what our concern was the emotional roller coaster that people were being taken on with the ups and downs of this litigation and all of the narratives around this," said Desmond Meade, executive director of the Florida Rights Restoration Coalition.

Despite all this uncertainty, the same organization that worked to get voting rights reinstated is doing everything it can to get as many voters as possible to the polls in November.

Said Meade, "This is a new constituency group that would force both sides to come to the table to figure out how we improve people's lives. How do we make our communities safer, while still respecting the dignity and the humanity of every citizen?"

The cause has caught the attention of athletes, actors and notably one of the wealthiest individuals in the country. Former presidential candidate Michael Bloomberg has raised $17 million to clear the way for more than 30,000 former felons to vote.

Bloomberg said that spending the money to pay off the fines of mostly Black and Hispanic ex-convicts is a, quote, "nominal investment" to help Democratic presidential candidate Joe Biden win Florida...though Meade and the FRCC say they are not trying to help any party in particular.

Bloomberg’s money will be combined with another $7 million the Florida Rights Restoration Coalition raised from 44,000 individual donations.

"The story is much bigger than Bloomberg. It's about number one, I think the returning citizens that will have an opportunity to participate in the most important election this country has ever seen. And then number two, how American citizens in general are rallying around these returning citizens to make sure that they can create a more inclusive democracy," said Meade.

This law requiring back fees to be paid was passed by the Republican-controlled state legislature several months after Amendment 4 took effect. …And the legal fight over its constitutionality has been going on ever since.

Julie Ebenstein from the ACLU was one of the first to file suit.

Said Ebenstein: "I don't think that the average voter said, even if someone has finished their sentence, they're off paper. They're back in the community. They're working, they're raising their family. … But they have a civil judgment where they owe money that they'll never be able to pay, that somehow those folks should be disenfranchised for life."

According to the ACLU, the law will keep 774,000 potential voters in Florida disenfranchised.

"The difference of a few hundred or a few thousand votes can have a huge impact,” said Ebenstein.

Meade advocated for Amendment 4 by traveling all over the state convincing regular people that former felons deserve the right to vote.