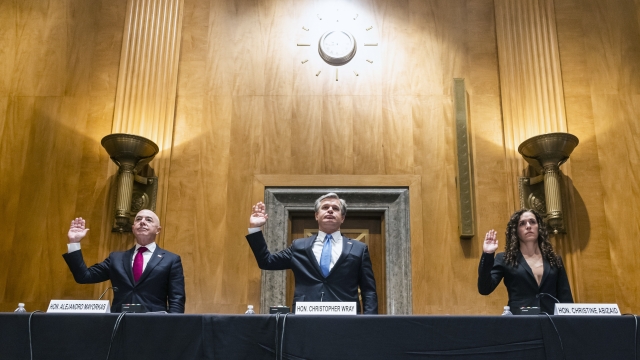 SMS
National Security Officials Brief Senators On Security Threats
By Nathaniel Reed
By Nathaniel Reed
September 21, 2021
The potential resurgence of Al-Qaeda, ISIS, and other groups in Afghanistan could rise to a national security threat – as soon as 2022.
SHOW TRANSCRIPT

Twenty years after the intelligence failures of the September 11th attacks, the Senate Commitee – transformed by that dark day – held its annual meeting to assess the dramatically different challenges now facing the United States.

Officials say Americans are now most threatened by home-grown terrorism instead of attacks from abroad.

"The primary threat in the homeland comes from individuals inspired to violence, either by foreign terrorist groups or other domestic grievances and ideologies," Abizaid said.

And at the forefront – an evolving threat of domestic violent extremism inspired by conspiracy theories, distrust of government, and racism is on the rise.

"We're now at 2700 domestic terrorism investigations when, if you went back two and a half years ago, we were probably more about 1000. So it's been a really significant jump there," Wray said.

But on the horizon, a stark warning about Afghanistan nearly two decades after Osama Bin Laden used the country as a staging ground for the 9/11 attacks.

"We've got to monitor and assess whether that's going to happen faster than we had predicted otherwise," Abizaid said. "Afghanistan is a very dynamic environment right now."

The potential resurgence of Al-Qaeda, ISIS, and other groups in Afghanistan could possibly rise to the level of a threat to national security – as soon as next year.