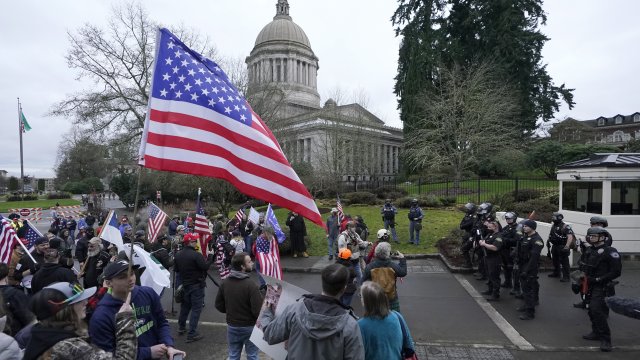 "The height of our vulnerability is right now and through the next days," says Steven Cash, who was the chief of staff for the Director of National Intelligence.

After the epic security failure at the Capitol, fears go beyond rioters entering offices and tampering with government material:

"The congressmen, congresswomen, senators and their staffs should be worried that some of their materials, be it electronic or be it paper files, could have been compromised," says Larry Pfeiffer, former CIA chief of staff and director of the White House Situation Room, now

"What we saw yesterday was just the start of a much broader goal. I think we are likely to see more violence in the coming weeks," says Elizabeth Neumann, former assistant secretary for Counterterrorism & Threat Prevention at the Department of Homeland Security.

"They're going to study what the concerns are of these individuals in that crowd, and they're going to approach them in a sympathetic fashion. So it may be economic. It may be racial. It may be with regards to feelings of a lack of enfranchisement. Things of that nature," says Pfeiffer, now director of the Michael V. Hayden Center for Intelligence.

Concerns come as questions are mounting over why police were ill-equipped to handle the mob, especially after plans of attacks were discussed online.

"This is not an intelligence failure. This might be an intelligence sharing failure. And it's certainly a failure and preparedness. We knew there were going to be problems yesterday, but people didn't do their jobs to protect us," says Neumann.

Meanwhile, with dozens arrested and four dead, the FBI is seeking help in identifying violent agitators.

"There's no doubt that the Joint Terrorism Task Force is working on this over in the D.C. office. They're going to look at the videos," says Stewart. "They're going to see — they're going to take inventory with the Capitol Police. And Metro PD probably is probably going to have the lead on most, most of what happened yesterday."

President-elect Joe Biden called it “one of the darkest days in the history of our nation,” blaming President Donald Trump for inciting violence over the past four years.

"Those of us who worked in the intelligence community, we've seen this scene many times before: endless images of parliament buildings or presidential palaces being stormed by mobs. But it happens over there. It doesn't happen here," says Cash.