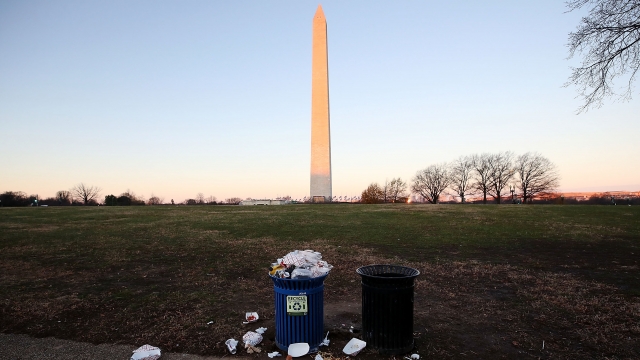 SMS
Govt. Watchdog: National Parks Were Open Illegally During Shutdown
By LeeAnne Lowry
By LeeAnne Lowry
September 6, 2019
Lawmakers asked the U.S. Government Accountability Office if reallocating funds to keep the parks open was legal. The answer was no.
SHOW TRANSCRIPT

The Trump administration illegally kept national parks open during the 35-day partial government shutdown in December and January. That's according to an opinion from Congress's non-partisan investigative branch.

During the shutdown, the parks stayed open but were understaffed, resulting in sanitation problems like overflowing trash and dirty restrooms. The National Park Service decided to fix the problem by reallocating entrance fees.

The law that allows the parks to charge an entrance fee also stipulates that the funds be used for park maintenance and enhancement. The problem boils down to budget categories: The sanitation problems aren't categorized as maintenance. Sanitation falls under operations, which is within the Congressional budget provided to the National Park Service.

Lawmakers asked the U.S. Government Accountability Office to give advice on whether or not that was legal. The office concluded on Thursday that since the funds were reallocated into a Congressional budget category, it was illegal for the government to move the funds without Congress's approval.

The Government Accountability Office said that the Interior Department should report its violations to Congress and outline a plan to stop this from happening again.