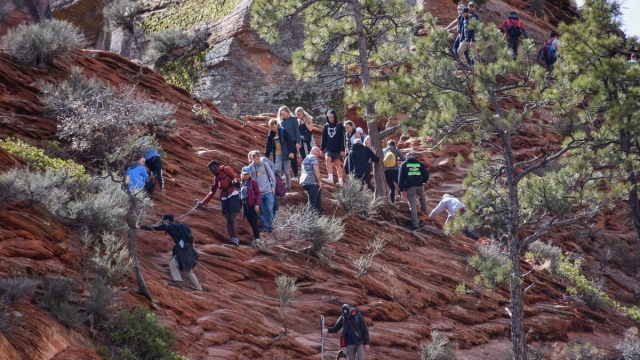 SMS
National Parks Ask To Close As Coronavirus Cases Rise In The U.S.
By Caitlin Baldwin
By Caitlin Baldwin
March 27, 2020
Some national parks are asking the government to order their closure to help stop the spread of the virus.
SHOW TRANSCRIPT

As national parks continue to see a surge in visitors, some parks are asking the government to issue more closures.

With many Americans working or doing schoolwork from home now, more people have been heading to national parks to get out of the house. On top of that, Interior Secretary David Bernhardt waived entrance fees for visitors. The move has been criticized as encouraging people to visit the parks when they should be social distancing. The National Parks Conservation Association called the decision "beyond reckless."

Zion National Park in Utah posted this photo of Angels Landing to Twitter Sunday after many visitors were seen crowding popular trails and lookout points. The park said "Practice #SocialDistancing! ... We do not recommend hiking busy narrow trails (like Angels Landing)." Zion park later closed Angels Landing, along with a number of other spots, over coronavirus precautions.

The Interior Department recently agreed to close Yellowstone, Grand Teton and Great Smoky Mountains parks after an increase in visitors.

The Navajo Nation, along with local governments in Arizona, are now requesting to close Grand Canyon National Park to lessen the spread of COVID-19.

The Navajo Nation's Tribal president and vice president wrote in a letter: "We are experiencing constant traffic through Navajo communities, and we simply cannot afford any additional outbreaks among our Navajo people, non-Navajo residents or those tourists traveling through the Navajo Nation."

A spokesman for Interior Secretary Bernhardt said the department is making decisions about closures on a park-by-park basis.