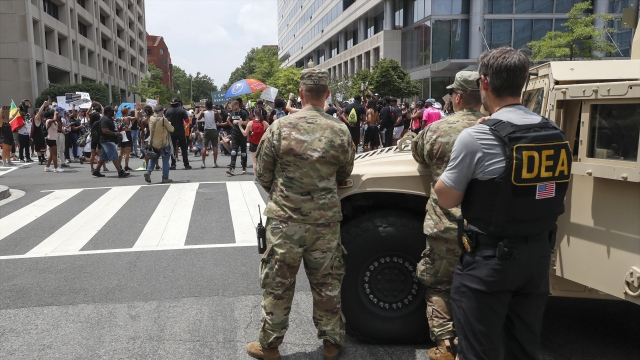 More than 5,000 National Guard troops were deployed to the nation's capital. But, protests have been peaceful over the last few days. More than 10,000 people marched through the city Saturday demanding justice for George Floyd and speaking out against police brutality and racial inequality.

On Sunday, President Trump said the National Guard troops "will be going home, but can quickly return, if needed. Far fewer protesters showed up last night than anticipated!"

He initially ordered National Guard troops to be stationed in D.C. last week. He pledged to "dominate the streets."

On Sunday, D.C. Mayor Muriel Bowser spoke with Fox News about troops being stationed there. She said, "What we saw last week was basically an invasion of our city. Active-duty Army troops moved from all points around the country to threaten our autonomy."

Bowser had demanded the Guard be removed, saying its presence in the district was "inflaming" the situation. On Sunday, she cited calmer protests. She said, "What we heard was people exercising their First Amendment rights and demanding justice and peace in a more fair system and we, as I understand it,  had no arrests last night."