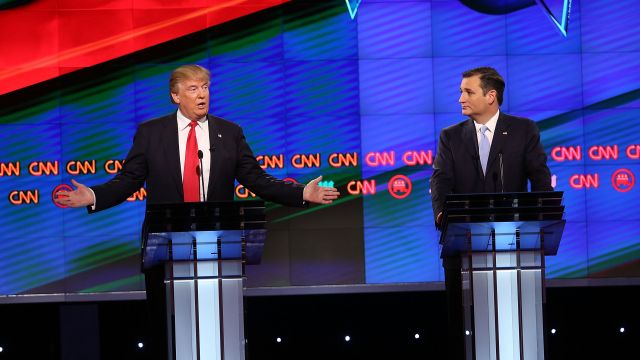 SMS
National Enquirer Takes Trump Vs. Cruz Feud To A New Low
By Jake Godin
By Jake Godin
March 25, 2016
The Republican front-runners are fighting back and forth over their wives this week instead of talking about policy.
SHOW TRANSCRIPT

"Let me be clear, this National Enquirer story is utter garbage," Ted Cruz said at a press conference.

Welcome to the next episode in the saga that is Donald Trump and Ted Cruz's very public battle over their private lives.

The National Enquirer published a story alleging Cruz has taken part in at least five extramarital affairs. Cruz has denied this. He's also accused Trump of being behind the gossip.

"And so, Donald, when he's losing, when he's scared, when Republicans are uniting against him, decides to peddle sleaze and slime," Cruz said.

Trump himself responded in a statement saying he had nothing to do with the cover story, though he did point out the tabloid's been correct about some rumored affairs in the past.

That capped off an entire week where the GOP's two leading contenders for the Republican nomination pretty much wrestled in the gutter.

It started earlier in the week with a pretty revealing GQ cover photo of Trump's wife, Melania, in a meme. An anti-Trump super PAC claimed responsibility.

Trump responded by threatening to "spill the beans" (whatever that means) on Cruz's own wife, Heidi Cruz. Cruz said he had nothing to do with the super PAC.

The next day, Trump retweeted a follower of his on Twitter who uploaded what some called a somewhat misogynistic image of Cruz's and Trump's wives. Cruz wasn't very happy about that.

"It's not easy to tick me off. I don't get angry often, but you mess with my wife, you mess with my kids, that'll do it every time. Donald you're a sniveling coward, and leave Heidi the hell alone," Cruz said.

All told, the National Enquirer story fit right in to an ugly week for the GOP front-runners. Hopefully the candidates will get back to debating the issues rather than their spouses.