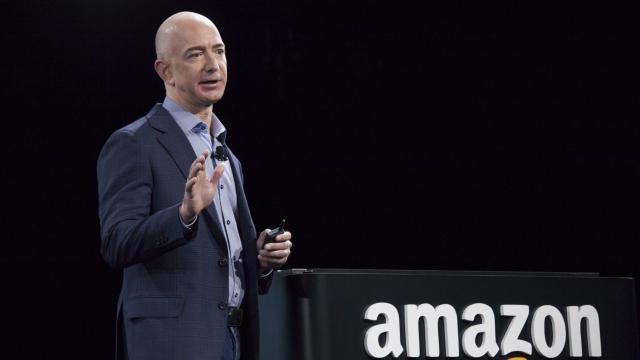 The parent company of the National Enquirer says it will look into accusations that the magazine tried to blackmail and extort Jeff Bezos.

The Amazon CEO and Washington Post owner published a candid article online Thursday detailing the alleged extortion. Bezos says representatives for the tabloid repeatedly threatened to publish some of his intimate photos and text messages.

Let's start at the beginning. Bezos and his wife announced plans to divorce in early January. Shortly after that, the National Enquirer published a story alleging Bezos had an affair, and it included some of his personal text messages.

Bezos hired an investigator to find out how his text messages were leaked and if the story was politically motivated. And his investigator told The Daily Beast that their "strong leads point to political motives."

The National Enquirer apparently didn't like that accusation. According to Bezos' online article, they sent his team multiple emails telling them to stop publicly accusing the outlet of being politically motivated. And in exchange, the tabloid would promise not to publish those private photos and additional text messages.

Bezos said, "These communications cement [the outlet's] long-earned reputation for weaponizing journalistic privileges, hiding behind important protections, and ignoring the tenets and purpose of true journalism."

The National Enquirer called its communication with Bezos' team "good faith negotiations" and it insists it "acted lawfully."

But if the accusations the Amazon chief laid out are true, that could spell big problems for the outlet. The magazine's publisher signed an immunity deal with the Department of Justice for its role in killing a story to protect President Donald Trump during his campaign. That immunity goes away if the blackmail and extortion accusations are true, and federal prosecutors are reportedly looking into it.