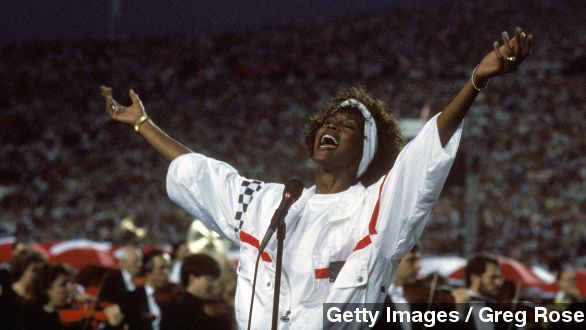 SMS
National Anthem Turns 200: Hear Its Most Iconic Renditions
By Jamal Andress
By Jamal Andress
September 14, 2014
The Star Spangled Banner is two centuries old, but artists have only begun putting truly alternative spins on the anthem in the last 50 years or so.
SHOW TRANSCRIPT

It's been 200 years since Francis Scott Key wrote the words that, to this day, unite a nation. The Star-Spangled Banner is performed everywhere from middle school assemblies to the Super-Bowl. And while everyone tries their best to do it justice ...

"And the rockets, red glare! I'm gonna make up for it now."

... there are some performances that just stay with us.

One such performance came from Whitney Houston at the 1991 Super Bowl. Giving one of the most memorable National Anthem performances of all time, Houston's rendition came at an important time for the country.

As The Wall Street Journal points out, "With America immersed in the Persian Gulf War, the song was more than a ... prelude to a game. It spoke to a nation."

The electric performance was so popular Houston's record label put it out as a single and upon its release it climbed to the top 20 on the Billboard charts.

Billboard Magazine's editor tells ABC, "It may well be, with the exception of her version of Dolly Parton’s, ‘I Will Always Love You,’ the most remembered thing about her."

But if there's a mark against Houston and her Super Bowl 25 Star Spangled Banner it's this. "And you know there was controversy about Whitney doing the national anthem and lip-syncing."

Which brings us to another famed performance, which unlike Houston's rendition, was live and remarkably bizarre.

Rolling Stone writes of the Woodstock performance, "Jimi Hendrix reinvented it from top to bottom as a showcase for what could be done with extreme, high-volume electric guitar distortion, his riffs often interpreted as mimicking weapons explosions and bombs dropping from the sky."

In the song's 200 year history it wasn't until the last 50 years or so that musical artists began putting their own signature on the classic ballad which was not always well received. As NBC notes, "Some thought it was brilliant, others considered it disrespectful."

And while the performance received harsh criticism and left members of the audience clearly stunned it is certainly one of the most iconic versions of the 200-year-old anthem.

Marvin Gaye took his turn at the Star Spangled Banner in 1983 but not the way anyone imagined, the Motown legend shocked the audience and the nation with his soulful rendition.

"For the land of the free"

Grantland writes of the re-imagined performance, "Gaye did handstands on the anthem’s proper stylistic plank."

For a song that is performed literally hundreds of thousands of times all over the country every year it's impressive to stand out in the crowd.