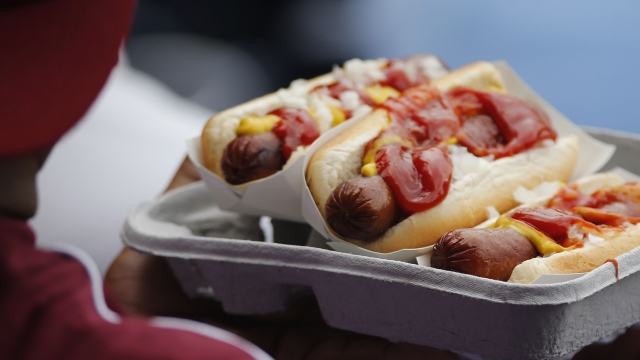 SMS
What Nathan's Famous Gets Out Of Being The New Official MLB Hot Dog
By Ryan Biek
By Ryan Biek
March 28, 2017
But this doesn't mean you can eat its hot dogs at every ballpark.
SHOW TRANSCRIPT

It's taken more than a century for Major League Baseball to finally choose an official hot dog.

But while Nathan's Famous has snagged the gig, fans shouldn't expect any major changes on opening day.

Becoming an official league sponsor puts Nathan's in the company of Papa John's and Budweiser.

However, like those pizza and beer deals, this doesn't mean everyone will be buying Nathan's hot dogs at the games.

Individual teams and stadiums have their own partnerships for food and beverages. Before the MLB deal, Nathan's already had agreements with a handful of the league's 30 teams.

By comparison, Papa John's and Budweiser each have separate agreements with more than 20 teams.

What Nathan's is really gaining is the right to use MLB trademarks in ads and have a hand in the league's "Play Ball" initiative, which aims to grow the sport's popularity among kids.

As of Tuesday afternoon, neither MLB nor Nathan's said how much the deal was worth.