Nate Diaz Is The Real Loser In Conor McGregor Vs. UFC 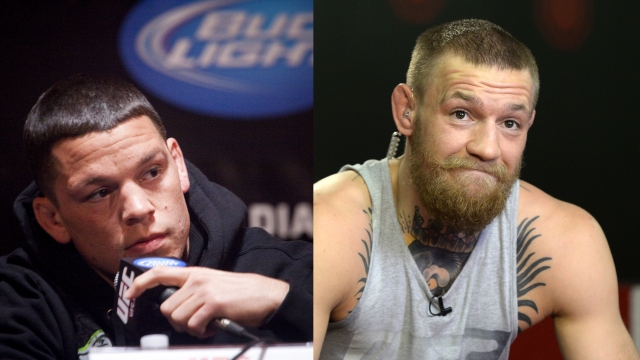 Outspoken Irishman Conor McGregor is the UFC's brightest star, but he's been pulled from his fight at the company's biggest event in July. And – surprise – his would-be opponent isn't thrilled about it.

"I didn't ask for the fight, but he asked for it, and he wanted it, and if that ain't gonna happen, I'm going on vacation," Nate Diaz said Friday at a press conference in Las Vegas.

That was Nate Diaz, the man McGregor was supposed to fight at UFC 200 on July 9 before he was booted from the card for missing that very press conference and some other promotional events in Vegas that weekend.

McGregor has been sparring with UFC management over reducing his promotional schedule, saying in a Facebook post, "There comes a time when you need to stop handing out flyers and get back to the damn shop."

Of course, McGregor also alluded in the post to what happened in his last fight, something Diaz made sure to point out at the presser.

Losing McGregor is still a pretty big blow for UFC 200, which the company is billing as it's biggest card ever. But UFC President Dana White is sticking to his guns, saying the show can, and will, go on without McGregor.

But Diaz doesn't seem as comfortable with the situation as White does. He says he doesn't mind that McGregor wants to train instead of promote and is still preparing to fight McGregor in July, even though that's looking pretty unlikely.

Even though McGregor wasn't at Friday's press conference, he might've tuned in to watch the thing. McGregor tweeted out: "Everyone flew in. Respect. But not everyone up there made the company 400 million in 8 months."