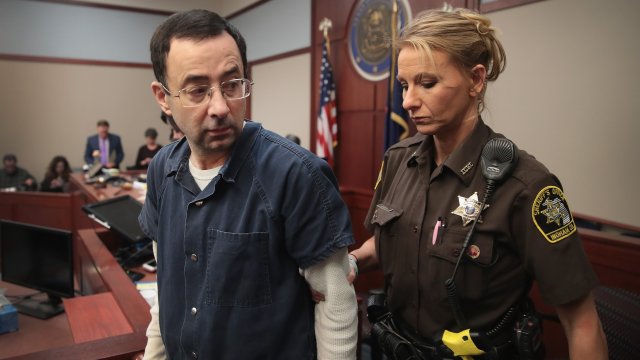 Years after seeing Larry Nassar in the courtroom, that image remains vivid for Rachael Denhollander. She was one of the first people to publicly accuse Nassar.

Denhollander said Nassar abused her multiple times starting at age 15, all under the guise of medical care.

"I think it is just one of those things that doesn't fade out of memory," she said.

"One of the things we tried to detail was just the abusive culture of gymnastics," Barr said. "[That's] not just at the club level, but at the elite level as well. It was in that setting that Larry Nassar emerged as the 'good cop.' So that's one of the ways he was able to manipulate and groom his victims."

In their investigation, Murphy and Barry revealed former USA Gymnastics President and CEO Steve Penny could have stopped Nassar's behavior in 2015 — about a year before the first victims went public. They obtained emails and documents that show Penny had detailed notes about allegations from star gymnast McKayla Maroney. Penny alerted the FBI, but rather than warn the public about Nassar, he elected to stay quiet.

"We were able to uncover some emails of those conversations that happened," Murphy explained. "As that was happening, as this FBI investigation was slowly working its way around the country through some different rooms of bureaucracy, Larry Nassar continued to see patients and dozens of [girls] at that time [who] say they were sexually abused."

There are 265 known survivors of Larry Nassar's abuse. Their stories were part of the larger #MeToo movement. Now that initial wave of allegations has come to light, a major question lingers: Has anything changed? 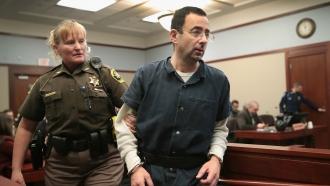 "I think we are starting to have the discussions that we need to have," Denhollander said. "But I don't think we have reached a place of making change yet."

Specifically, in the gymnastics world, there are some reforms: The "Safe Sport" policy was created to give athletes a resource to report abuse. It also includes a code of conduct and mandates for coaches to follow. For instance, an adult cannot be alone with a minor athlete unless there is another adult in the room to observe or interrupt. But as Barr and Murphy found out, even that rule has its shortcomings.

"For example, with written permission, a coach can be alone with a minor while traveling to a competition," Barr explained. "One of the things that we learned was how effectively Larry Nassar was able to groom parents and victimized them just as much as the young women he sexually assaulted. So people feel that the rules are not enough, and Safe Sport, the company set up to field abuse complaints, by its own admission is overwhelmed."

If you broaden the scope, a report from Yale University found, in general, more women are reporting their claims as a result of the #MeToo movement. However, the study notes this doesn't mean cases will be prosecuted and the accused are convicted.

"Many victims are silenced, and by the time they are healed enough from the trauma, the doors of the justice system are closed to them because of archaic evidentiary codes and statute of limitations. So we have legislative work that needs to be done," Denhollander explained.

As for Rachael Denhollander, she's using her own experience to help others. She authored a book called "What Is A Girl Worth?" and has become an advocate for sexual assault survivors.

"I'm not dependent on how my abuser responds — whether he ever admits what he did or is sorry," she said. "I'm not dependent on the evaluation of 12 members of the jury. I know what's true. I can hold to what's true. And that means you can grieve the damage and grieve the loss in ways that are nondestructive. And learning how to grieve in a way that's not destructive is really the first step to healing."