Nasdaq Sets New Record, But Does It Mean We're In A Bubble? 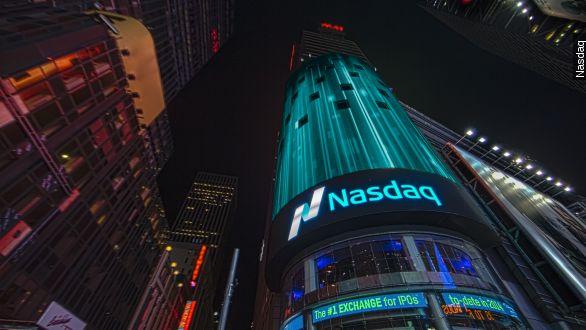 SMS
Nasdaq Sets New Record, But Does It Mean We're In A Bubble?
By Jake Godin
By Jake Godin
April 24, 2015
The Nasdaq makes a triumphant return, surpassing its previous record made right before the dot-com bubble blew in 2000, but are we in a new one?
SHOW TRANSCRIPT

For the first time in 15 years, Nasdaq has officially recovered from the dot-com bubble burst.

At closing time Thursday, Nasdaq finally caught back up to where it was 15 years ago, closing at 5,056 — or just 8 points higher than its previous closing record of 5,048 in 2000. (Video via Nasdaq)

That, of course, was the year the great speculative dot-com bubble popped, tanking the Nasdaq along with a long list of tech companies with inflated values.

Since then it's a been a tumultuous journey for the New York City-based stock market, going through two economic recessions and really not hitting its stride until around 2010.

So what's the difference between now and 15 years ago? Valuations. Today, companies are valued at much closer to what they're actually worth.

Speaking to NPR, Cumberland Advisors co-founder David Kotok gave Microsoft and Cisco as examples. In 2000, the duo's stock prices were 100 times their actual earnings. Now, they're only about 17 times more. (Video via Microsoft, Cisco)

That's not to say we don't still have companies with inflated pricing. Indeed, inflated tech companies, among other factors, are leading more and more market watchers to ask whether we're floating through a new, worse bubble.

Writing for Fortune last May, Adam Lashinsky said the fact he — a journalist — was offered IPO shares by a tech company was evidence enough we're in the midst of a bubble.

And last July, another analyst writing for MarketWatch declared we're currently in the third biggest stock bubble in U.S. history.

And then, of course, you have Mad Money’s Jim Cramer from earlier this year.

"Let me just say, it does your career, if you're like me, no harm at all to call this move a bubble. If it implodes, you're a genius! If it doesn't, who cares? You're just early!" Cramer said.

Right. So maybe we're in a bubble, maybe we're not. Investors don't seem to be too worked up about it for now — Nasdaq pricing is keeping steady, hovering around 5,095 during afternoon trading Friday.

This video includes images from Getty Images and Nasdaq.