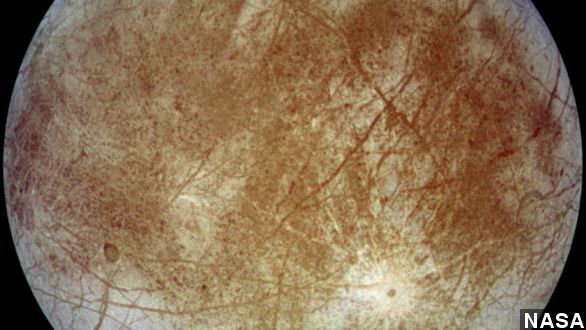 SMS
NASA Wants To See If There's Life On One Of Jupiter's Moons
By Jill Ornitz
By Jill Ornitz
February 21, 2015
NASA plans to research if life exists on Jupiter's moon Europa. Scientists have long believed an ocean exists under the moon's icy surface.
SHOW TRANSCRIPT

NASA astronauts may soon be headed to Jupiter to research if there could be life on one of the planet’s icy moons.

Scientists plan to research the surface of Europa, which NASA has long thought has the liquid water, chemical elements and energy source needed to sustain basic lifeforms.

The current plan would involve a spacecraft orbiting Jupiter and snapping photos of the moon’s surface. (Video via NASA)

But scientists are also searching for ways to collect and analyze plumes of water vapor erupting from Europa’s surface. (Video via NASA)

The Hubble Space Telescope first spotted those plumes in 2012.

Europa’s icy shell is widely believed to be covering an ocean of water, and the plumes could be a way to sample that water.

But what exactly would researchers be looking for in the vapor samples?

It seems there are a variety of opinions. One NASA astrobiologist told National Geographic researchers should look for amino acids, which organisms use to build protein.

But a researcher at the University of Glasgow also told the publication complex molecules made up of different types of atoms typically indicate signs of life. (Video via NASA)

The White House included $30 million in NASA’s budget for fiscal year 2016 to plan the Europa mission. The entire mission is eventually expected to cost much more — $2.1 billion — and could launch as early as 2022.

This image includes images from NASA.