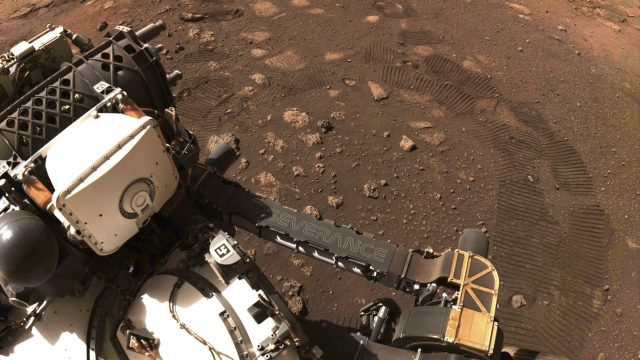 By Meg Hilling
March 17, 2021
NASA is partnering with Navajo Nation to name geographical features on Mars discovered by the 2020 Perseverance rover.
SHOW TRANSCRIPT

"I never thought I would see my two worlds overlap in this way and create such an amazing opportunity," said Aaron Yazzie, a mechanical engineer at NASA's Jet Propulsion Laboratory.

As the Mars 2020 Perseverance rover begins to make discoveries on the Red Planet, NASA is using the Navajo language to name geographical features it encounters.

"The first rock target has been applied the name Máaz, which is the Navajo translation for Mars, which is basically a form of the English word," Yazzie said.

Yazzie says the use of the Navajo language reflects where the rover landed. Prior to launch last summer, NASA divided the landing site in the red planet's Jezero Crater into quads named after national lands on earth. The quad the rover landed in is named for the Canyon de Chelly National Monument, which is located in Arizona on the Navajo Nation.

"So I just happened to be in a really good position to sort of be the go-between, between both of these. The Navajo Nation president's office and the Mars 2020 science team," Yazzie said.

Yazzie is Navajo himself and through a collaboration between NASA and his tribe, he helped create a list of names that honor Navajo culture. Some are based on the landscape of Mars, such as "rolling row of pebbles, like waves." Others are Navajo words for "beautiful" and "strength."

"We've actually been able to come up with a translation for the word perseverance, which we're saying is Ha’ahóni, which is sort of like being strong-minded and strong-willed," Yazzie said.

Navajo is a complex language with special characters the rover couldn’t read.

"Instead we've decided to write out all of these Navajo words, more phonetically so that we can write it in the English language, but it still sort of looks similar to the way it should be pronounced," Yazzie said.

This use of Navajo has drawn comparisons to the Navajo Code Talkers of World War II, where the native language was used to send secret messages. In a statement, Navajo Nation President Jonathan Nez said, "Our words were used to help win World War II, and now we are helping to navigate and learn more about the planet Mars."

"That's such a giant, historic, monumental thing that happened. And it's deeply, deeply, respected on the Navajo Nation and to just even be mentioned that this is similar to that is just amazing," Yazzie said.

Yazzie hopes this use of the Navajo language and his involvement in space exploration will help inspire language revitalization among Navajo kids and a belief that they can work at NASA someday too.

"I don't want them to eliminate big dreams. And I want them to know that they belong at places like NASA," Yazzie said.