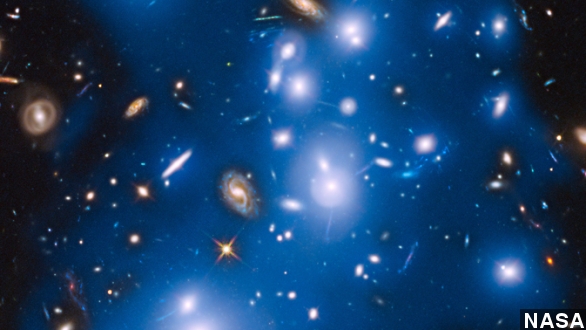 Halloween may be over, but that doesn't mean you won't still see a ghost or 200 billion wandering around.

We're talking about stars, people. This image was captured by NASA's Hubble Space Telescope. The blue clusters are described as the "faint, ghostly glow of stars ejected from ancient galaxies that were gravitationally ripped apart several billion years ago."

According to NASA it happened within a collection of about 500 galaxies nicknamed “Pandora’s Cluster.”

Astronomers believe 6 of those galaxies, some as big as our own Milky Way, were gravitationally pulled apart over a span of 6 billion years.

​Following the destruction of the galaxies, the recently-spotted stars were orphaned. They now float around the area where their parent galaxies once were.

Okay, this is starting to sound like a twisted horror movie.

But the spooky images are good news for NASA, which calls the sightings "important steps forward in understanding the evolution of galaxy clusters. ... It is also amazingly beautiful in that we found the telltale glow by utilizing Hubble’s unique capabilities.”

The Hubble Telescope is the only device capable of capturing such faint light from four billion light years away.

A team at NASA believes it took about 200 billion of the outcast stars just to generate about 10 percent of the light detected.

This video includes images from ToyahAnette B and Jackie / CC BY 2.0.