NASA's SOFIA: Why A Plane Is A Good Place For A Telescope 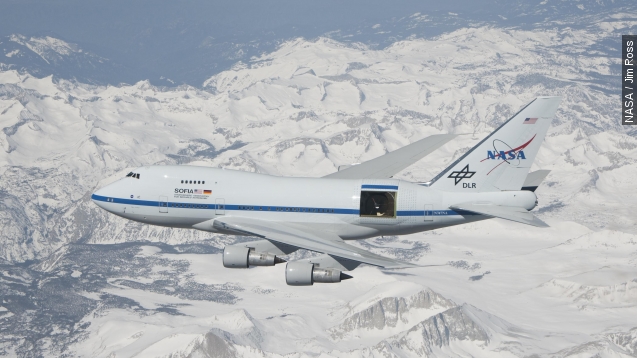 SMS
NASA's SOFIA: Why A Plane Is A Good Place For A Telescope
By Evan Thomas
By Evan Thomas
June 20, 2015
NASA’s Stratospheric Observatory for Infrared Astronomy can go anywhere and get higher than any ground-based telescopes.
SHOW TRANSCRIPT

Your traditional telescope is anchored to the ground under a big dome.

But sticking one on a plane works better than you might think.

The Stratospheric Observatory for Infrared Astronomy, which is a joint venture between NASA and the German Aerospace Center, is a 100-inch infrared telescope mounted to a heavily modified Boeing 747. (Video via NASA)

SOFIA just started five weeks of science in the southern hemisphere, flying out of an airport in Christchurch, New Zealand.

And at altitudes of up to 45,000 feet, it has a better vantage point than even the highest ground-based observatories in Chile’s Atacama Desert.

At that height, the telescope is above 99 percent of the water vapor in the atmosphere, which makes for some of the clearest images short of orbiting observatories.

On this deployment, astronomers will focus SOFIA’s instruments on the births and slow deaths of massive stars.

Project Scientist Pamela Marcum says such giants are so rare “even the nearest examples are more than a thousand light years away.” SOFIA’s telescopes are perfect for the high-precision job.

It will also collect observations of Pluto’s atmosphere less than a month before NASA’s New Horizons probe is scheduled to pass the protoplanet. (Video via NASA)

SOFIA is perhaps the best observatory for that task, as well, since it’s easier to put in the right place in the right time than even orbital telescopes. It did the same thing back in 2011. (Video via Smithsonian Channel)

The rest of SOFIA’s observations will continue through July. The plane is expected to return to its home airport in California on July 24.

This video includes images from the European Southern Observatory, NASA, and music by Broke For Free / CC by NC 3.0.