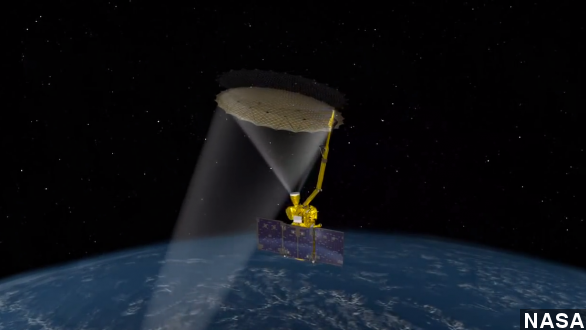 The best way to track the moisture in the dirt under your feet is to scan it from space.

That’s the mission for NASA’s SMAP satellite, which just made it safely to orbit.

The orbiter launched aboard a Delta 2 rocket on Saturday. It was NASA's third try after rough weather, and then mechanical trouble forced delays earlier this week.

SMAP stands for Soil Moisture Active Passive. The satellite will create high-resolution maps of ground moisture distribution across the planet, so scientists have a better understanding of water reserves.

"We can use the data to help forecast crop productivity, conditions for floods to occur, the extent of droughts, risk for wildfires," says SMAP project manager Kent Kellogg.

NASA says: "Current climate models uncertainties result in disagreement on whether there will be more or less water regionally compared to today; SMAP data will enable climate models to be brought into agreement on future trends."

The satellite itself is effectively a giant wobbling space mirror. Its roughly 20-foot reflector will rotate like a lasso about 14 times a minute, scanning out a 650-mile-wide strip of Earth as it orbits.

An active radar and a passive radiometer will scan the top two inches of soil for water content. SMAP will be able to look past cloud cover and light vegetation, day or night.

The plans call for a three-year primary mission, but SMAP still has a bit of a wait in orbit before it can get started. NASA engineers expect it will take more than a month to fully deploy and test its instruments and rotating mirror.