NASA's Scott Kelly Is Back On Earth; Now, He'll Be Prodded For Years 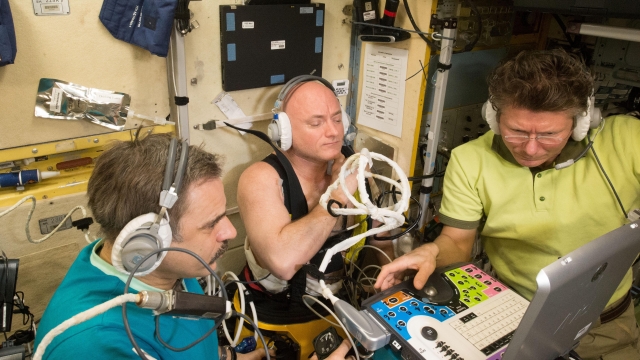 SMS
NASA's Scott Kelly Is Back On Earth; Now, He'll Be Prodded For Years
By Steven Sparkman
By Steven Sparkman
March 1, 2016
Scott Kelly spent a year in space to test the effects of low gravity on the human body, but the experiment doesn't stop now that he's back on Earth.
SHOW TRANSCRIPT

The part of the "Year in Space" mission where the astronauts are actually living in space may be over, but the experiment will continue.

NASA astronaut Scott Kelly is set to be poked and prodded for another two years to help scientists learn more about the long-term effects of space travel on the human body.

Space isn't too kind to humans. Aside from the fact that, as Kelly said recently, "a few inches from you is instant death," there are lasting effects of being in a low-gravity environment even when the missions are a complete success.

Some of the effects are well known. Astronauts have to exercise frequently in order to stave off the loss of muscle mass and bone density that comes from not having to fight gravity to get around.

They also can suffer vision problems. Without gravity, more of the body's fluids move into the head, raising pressure on the optic nerve. And they also can have difficulty performing physical tasks right after they're introduced to gravity again.

Scientists are learning more about those changes by studying Kelly with cutting-edge tools and techniques, but they're also looking at less-studied effects.

By comparing Kelly's readings to those of his identical twin brother, Mark, who spent the last year on Earth, researchers will be able to find possible effects of space travel on things like cardiovascular function, gut bacteria and even DNA.

Low gravity won't change a person's DNA, but it might change which genes get expressed. The researchers are looking for signs the body might adapt to life in space using its genetic on-off switches.

All of this research is important if we ever plan to send human beings to Mars or beyond. It can take the better part of a year just to get there, not to mention the mission and the return journey.

This video includes clips from NASA, the European Space Agency and CBS.