NASA's Second Orion Launch Attempt Goes Off Without A Hitch 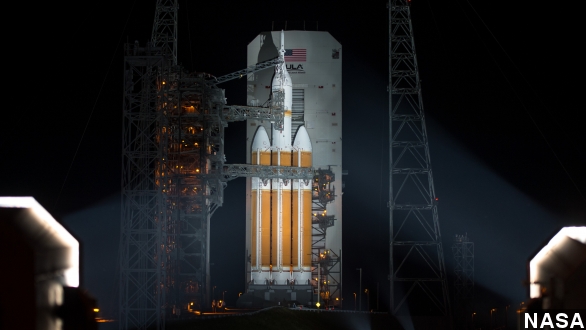 SMS
NASA's Second Orion Launch Attempt Goes Off Without A Hitch
By Evan Thomas
By Evan Thomas
December 5, 2014
NASA launched its Orion capsule after a scrubbed attempt Thursday. It's the first active space program since the shuttle program shut down in 2011.
SHOW TRANSCRIPT

Today was the first test flight of its Orion crew capsule, marking the first U.S. government-sponsored spaceflight mission since the shuttle program ended in 2011. (Video via NASA)

The spacecraft is designed to carry as many as four astronauts, though for this test it's unmanned. During the flight it will make two orbits at roughly 3,600 miles high, for a total flight time of about 4.5 hours. (Video via NASA)

NASA will have to use even bigger boosters to get long-duration missions into orbit, though. It's designing the Space Launch System to carry enough fuel and supplies to support jaunts to Mars.

Still, the Delta IV was enough to send Orion farther than any spacecraft designed to carry humans has gone since the Apollo program ended in 1972.

The spacecraft was originally scheduled to launch Thursday morning, but coordinators had to postpone the first launch attempt thanks to a boat that wandered into the exclusion zone in the Atlantic Ocean, where the spacecraft can splash down in the event of an emergency during launch.

Then high winds at the launch pad made it too dangerous to lift off. And finally a portion of the rocket's fuel pump system stopped working. NASA tried some live troubleshooting but eventually exhausted Thursday's launch window and declared the mission a scrub.

Orion will re-enter the atmosphere later today at around 20,000 mph — another milestone human spacecraft haven't hit since Apollo — and will splash down in the Pacific Ocean with the help of 11 different parachutes. (Video via NASA)

This is the first chance for NASA's scientists to see how Orion's systems perform in the more rigorous environment of space. They'll test its radiation and heat tolerances to make Orion safer for eventual manned flights to the Moon and Mars. (Video via NASA)

Those flights won't take place until 2021 at the earliest. NASA plans to run more tests between now and then, including an uncrewed flight to orbit the moon.