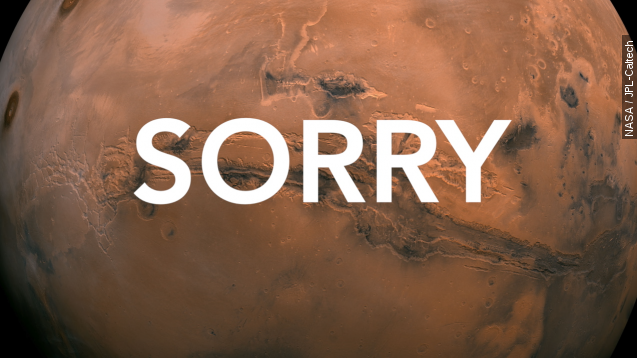 NASA is making a big announcement on Monday.

About something it found on Mars.

"Is such a thing even possible?" Giorgio Tsoukalos asks. (Video via History Channel)

Yes, NASA says it has a "major science finding" to share, but there are some good indicators that no, it's not aliens.

The biggest clue is probably the people doing the announcing. It's mostly planetary scientists and geophysics grad students set to talk on Monday, which gives this a better chance of being something about Mars' surface or structure.

Who would you even get to talk about first contact, anyway? Someone from the UN? Captain Picard? (Video via Paramount Pictures)

That's not as exciting as aliens, but it would also be better evidence for the existence of life elsewhere than we have today.

NASA tailors its exploration missions to hunt for the stuff, because its presence is one of the building blocks required to support life as we might recognize it here on Earth. (Video via NASA)

Another is organic molecules. NASA has found those on Mars, specifically some variants of methane. (Video via NASA)

Still not even microbial life, though, and NASA makes sure to knock down such rumors whenever they crop up.

NASA will be streaming its conference at 11:30 Eastern time on its website.

This video includes images from NASA and Getty Images. Music: "jon gordo" by Birocratic / CC BY 3.0 and by the U.S. Air Force.