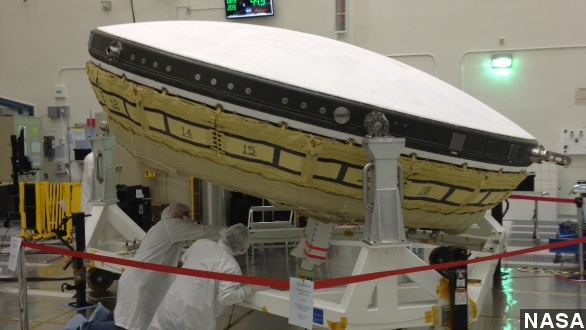 ​Residents of Hawaii, please do not panic! This June, the U.S. government will test what looks like a flying saucer in your state, but it’s no UFO.

It’s NASA’s Low Density Supersonic Decelerator, or LDSD, a spacecraft addition that could be the key to putting a man on Mars. Once the spacecraft hits a certain speed during landing, the LDSD inflates like a giant donut, giving it that classic flying saucer look.

The inflation is crucial, as it increases atmospheric drag and slows down the craft until a massive 30-meter parachute floats it down to a safe landing. (Via NASA)

Or, as Extreme Tech explains it, "something with a rugged first stage to take the initial brunt of interplanetary deceleration, and then a big ol' parachute to bring you down to ground-approach speeds."

NASA’s newest innovation is all about Mars, with the red planet featuring an atmosphere too thick for rocket deceleration and too thin for parachute landings with heavier cargo.

Either method could destabilize the spacecraft which, according to The Independent, "is bad enough when you’re risking a $2 billion lander like Curiosity, but out of the question if humans are the payload."

While the current rover's landing sequence is a relic from 1976, the LDSD could safely land up to 3 tons of cargo, doubling previous limits. It’s an imperative development if we ever want to visit or even colonize the red planet.

As NASA official Allen Chen tells the New Scientist, "It may seem obvious, but the difference between landing and crashing is stopping."

NASA will test the addition on the island of Kauai, where it will freefall from over 34 miles above the Earth. If all goes well, the LDSD could be ready for launch by 2018.