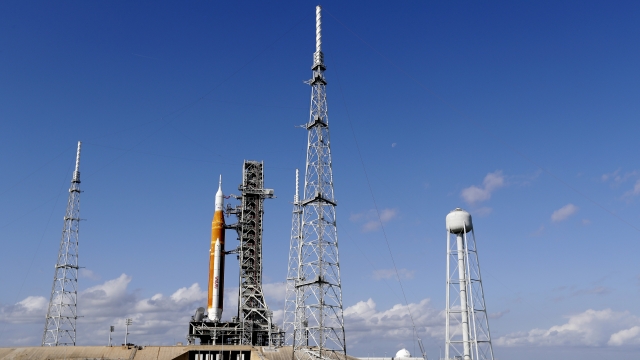 NASA remained on track for Wednesday's planned liftoff of its new moon rocket, after determining that hurricane damage provided little extra risk to the test flight.

Hurricane Nicole's high winds caused a 10-foot section of caulking to peel away near the crew capsule at the top of the rocket last Thursday. The material tore away in small pieces, rather than one big strip, said mission manager Mike Sarafin.

"We're comfortable flying as is," based on flight experience with this material, Sarafin told reporters Monday night.

Liftoff is scheduled for the early morning hours of Wednesday from NASA's Kennedy Space Center, with test dummies rather than astronauts on board. It's the first test flight for the 322-foot rocket, the most powerful ever built by NASA, and will attempt to send the capsule into lunar orbit.

The nearly monthlong $4 billion mission has been grounded since August by fuel leaks and Hurricane Ian, which forced the rocket back into its hangar for shelter at the end of September. The rocket remained at the pad for Nicole; managers said there wasn't enough time to move it once it became clear the storm was going to be stronger than anticipated.

Sarafin acknowledged Monday night that there's "a small likelihood" that more of the pliable, lightweight caulking might come off during liftoff. The most likely place to be hit would be a particularly large and robust section of the rocket, he noted, resulting in minimal damage.

Engineers never determined what caused the dangerous hydrogen fuel leaks during the two late summer launch attempts. But the launch team is confident that slowing the flow rate will put less pressure on the sensitive fuel line seals and keep any leakage within acceptable limits, said Jeremy Parsons, a deputy program manager.

The space agency plans to send astronauts around the moon in 2024 and land a crew on the lunar surface in 2025.

Astronauts last visited the moon in December 1972, closing out the Apollo program.

A microwave oven-size NASA satellite, meanwhile, arrived Sunday in a special lunar orbit following a summer liftoff from New Zealand. This elongated orbit, stretching as much as tens of thousands of miles, is where the space agency plans to build a depot for lunar crews. The way station, known as Gateway, will serve astronauts going to and from the lunar surface.

The satellite, called Capstone, will spend six months testing a navigation system in this orbit.