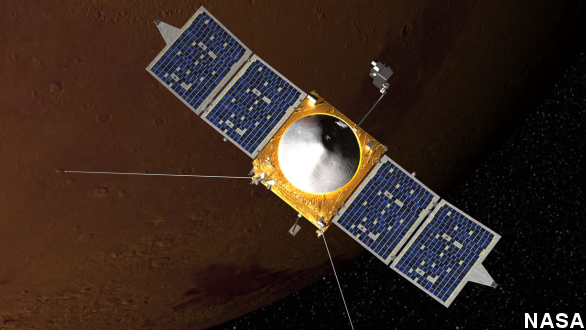 By Madison Burke
September 21, 2014
NASA's Maven will soon give information that could explain what happened to Mars' atmosphere.
SHOW TRANSCRIPT

NASA sent their MAVEN spacecraft to Mars 10 months ago to study the planet's atmosphere and — 10 months later — the craft has almost reached its destination.

MAVEN, which stands for Mars Atmosphere and Volatile Evolution, will collect data scientists will use to try to paint a picture of Mars' past. Its current atmosphere is so low, any water on the planet's surface would instantly dissolve, but scientists theorize it wasn't always like that.

Earlier missions have presented evidence that Mars once had at atmosphere that could support flowing water. Now, scientists want to know what happened to that atmosphere and why.

Researcher Bruce Jakosky said in a press release, “These are important questions for understanding the history of Mars, its climate, and its potential to support at least microbial life.”

Right now, the biggest theory is that the sun simply eroded Mars' atmosphere over time. MAVEN will be looking at how the sun influences the ​planet, while also studying the atmosphere's composition.

NASA hopes to get MAVEN on a ​consistent 35-hour orbit around Mars to accomplish this research.

NASA's Curiosity rover is already providing data from the surface.

The Denver Post reports NASA's social media team is planning on promoting MAVEN's arrival to the fullest. The team selected 25 people from across the country to live tweet, Instagram and post on Facebook throughout the event. They will be using the hashtags #JourneyToMars and #MAVEN.

The official MAVEN Twitter account will also be posting updates and the arrival will be broadcast live on NASA TV.

And NASA isn't the only one sending a satellite to study the Red Planet. India's Mars Orbiter Mission will arrive just two days after MAVEN and will be studying methane on Mars — something they hope will give them information about possible biological activity.

NASA says it hopes to compare data with India. MAVEN will fall into Martian orbit Monday.