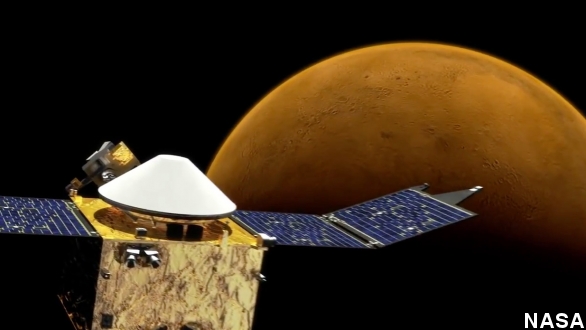 After a 10-month voyage through space, NASA's MAVEN spacecraft has finally reached Mars.

"Congratulations! Maven is now in orbit."
LOCKHEED MARTIN's GARY NAPIER: "What are you feeling right now?"
MAVEN FLIGHT SYSTEMS MANAGER TIM PRISER: "I'm about to pop. You know, it's a blender of pride and relief."

MAVEN, which stands for Mars Atmosphere and Volatile Evolution, will collect data while orbiting the Red Planet. Scientists believe Mars has changed a lot over billions of years and they'll use MAVEN to study the atmosphere and try to find clues as to why that's happened.

DIRECTOR OF NASA PLANETARY SCIENCE DR. JIM GREEN: "Way in its past, several billions years, we believe Mars had rivers, lakes and even oceans. It had an atmosphere that is much more extensive than it is now."

Additionally, Mars is scheduled to a have a visitor while MAVEN is in orbit. In a side project of sorts, researchers will pull in data from a comet that's expected to race by the Red Planet.

MAVEN PRINCIPAL INVESTIGATOR BRUCE JAKOSKY: "We have what I'll call a bonus opportunity with comet Siding Spring. ... On October 19, it's going to miss by only 132,000 kilometers, which is almost nothing."

When the Siding Spring comet flies by, NASA's spacecraft will reportedly be on the other side of the planet so it won't be affected by any incoming comet dust. It'll essentially be "shielded by the planet."

NASA's satellite will have some company around the Red Planet shortly. India's Mars Orbiter Mission is set to arrive Tuesday and will study methane on Mars — something they hope will give them information on possible biological activity.