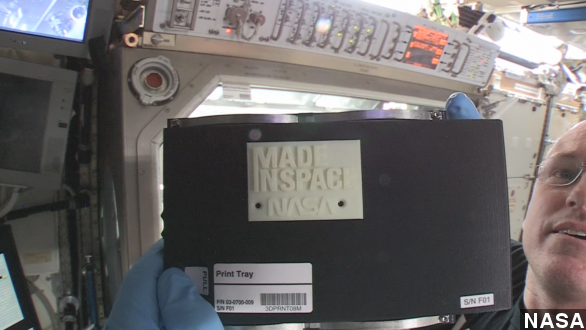 The International Space Station keeps getting all the creature comforts of a high-tech home — wi-fi, breathable atmosphere and now a 3D printer.

The printer and its product look much like those you’d find on earth, and uses the same heated plastic materials to create its projects. (Video via NASA)

The part was a faceplate for the printer itself — with the logos for NASA and Made in Space, the company that built the printer.

It’s an important step in proving the printer’s durability. It won’t break down as easily if it can build its own replacement parts, after all.

It’s also valuable as space agencies plan missions to more distant targets. NASA’s Bill Hubscher explains the further a mission is from Earth, the more useful creating its own supplies would be. (Video via NASA)

“When a part or a tool is broken or is not working correctly, and the spare part is 200 miles away here on the surface of the earth — explorers traveling to Mars or to asteroids will face these same challenges, but they won’t be able to get any resupplies,” Hubscher said.

The concept applies to more than just equipment. NASA is looking into using 3D printers to create space food, too — which has the potential to be compact and low-waste.

Made in Space chief engineer Mike Snyder writes on Space.com: tools, food, and more — anything is fair game as the printer technology develops.

“Future facilities will keep increasing the capabilities, to a point where the only items necessary to be launched into space are the astronauts themselves.”

The printer’s first set of parts will eventually make it back to Earth, however. Scientists want to compare them to versions printed on the ground to see how weightlessness affects the printing process.