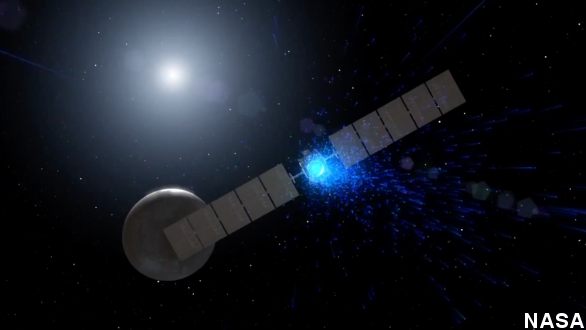 NASA engineers expect to have confirmation of Dawn’s arrival at Ceres by Friday afternoon.

Ceres is the final and most distant stop for the probe, which launched in 2007 to investigate protoplanets in the asteroid belt for clues to the formation of the early solar system.

Thanks to the time it spent around Vesta in 2011, Dawn will be the the first spacecraft to orbit two different celestial bodies.

It might be notable, but NASA says arrival at Ceres will be relatively boring: one of the lowest-key events in space exploration.

That’s thanks in part to Dawn’s xenon ion engines, which owe their enormous efficiency to their being slow to accelerate. (Video via NASA)

Really slow. They can get spacecraft going faster than traditional rockets, but it can take thousands of hours to build up that speed. 0-60, for example, takes four days. (Video via NASA)

The upside is Dawn won’t need any kind of high-risk insertion burn. Thanks to its long, slow deceleration it should more or less coast into capture orbit.

At a news conference Monday, Project Manager Robert Mase said “There will be literally nothing to watch at the time that it happens, so there won't be the type of dramatic Mission Control room event that you've perhaps seen on some other missions."

It will take six weeks or so for Dawn to enter a low-altitude orbit, at which point it will start mapping the surface of Ceres and breaking down the elemental composition of the dwarf planet. (Video via NASA)

NASA scientists will hunt for explanations for the bright spots Dawn saw on approach, and for the vapor plume spotted last year.

The mission will continue through July of 2015, which is expected to be a busy month for dwarf planet exploration: New Horizons will make its Pluto flyby the same month.