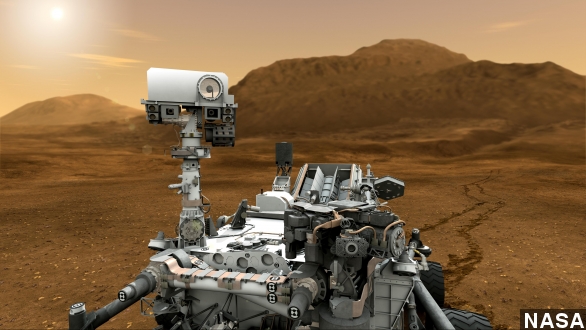 This week NASA hit a milestone with the Curiosity Rover. After more than two years, the interplanetary robot has finally reached its long-term goal.

HLN: “The rover Curiosity has arrived at what’s being called Mount. Sharp. It will go up the side of the mountain analyzing it as it goes. NASA hopes to learn more about the history of Mars as a result.”

Getting to the base of the three and a half mile high mountain hasn’t been a quick feat for Curiosity. Moving just 660 feet a day it took two years to travel the five and a half miles from the original landing spot in Gale Crater. (Video via KSTU)

And in August NASA decided to shift the rover’s path due to rough terrain tearing holes in Curiosity's wheels.

But now that the robot has finally made it, Jim Green, director of NASA's Planetary Science Division, said,  "Curiosity now will begin a new chapter from an already outstanding introduction to the world. ... After a historic and innovative landing along with its successful science discoveries, the scientific sequel is upon us."

So what does part two entail? Well just as Curiosity discovered proof the red planet once held freshwater — the rover will continue to look for what could be signs that life once existed on Mars.

As you can see on this map, the yellow line is the route the rover will take – it was rerouted to speed up the arrival to Mount Sharp and to have a more scientifically interesting path. The green star is Curiosity’s current location.

NASA: “At this location we’re looking forward to obtaining our first drilled sample of Mount Sharp. ... As originally planned, we’ll be exploring Mount Sharp layer by layer. Along the way we’ll be encountering a number of interesting geologic features.”

For this phase in the mission a NASA Planetary Senior Review panel has suggested the team do less driving and more drilling.