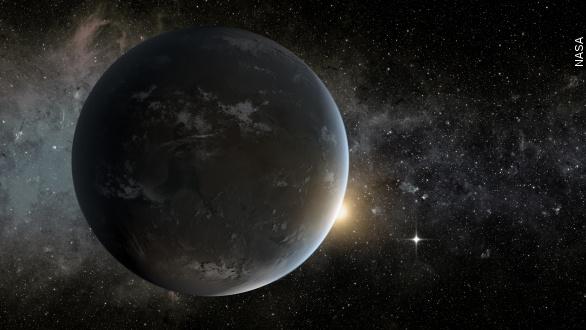 That's the line, from a NASA panel discussion Tuesday, that's grabbing all the headlines. An ambitious prediction from NASA's chief scientist Ellen Stofan that we're on the brink of discovering extra-terrestrial life.

And if local news anchors are anything to go off, people think that's a pretty outrageous claim.

KENS's Stacia Wilson said, "I don't know what else to say..."

"I wonder if this is like, another movie in the making," added anchor Jenny Suniga

A WPIX anchor said, "So a NASA scientist has come out and said, 'yes we will come into contact with an alien life form within the next 10 to 20 years..."

Again, to clarify, Stofan predicted, "strong indications of life beyond earth within a decade and I think we're going to have definitive evidence within 20 to 30 years."

From NASA's perspective, there are a lot of important advancements that are going to happen in those 20 to 30 years that make it not so outrageous.

For one, NASA's Kepler Mission, which has discovered more than 1,000 exoplanets — planets outside our solar system — keeps turning up potentially habitable ones. (Video via NASA)

And recent research suggests there are billions of those exoplanets that could support liquid water in our Milky Way galaxy alone.

Liquid water is arguably the most important factor when it comes to supporting life, as we know it anyway, and it's got scientists looking even closer to home — Jupiter's moon Europa. (Video via NASA)

NASA is planning a mission to Europa, which is thought to house an enormous sub-surface ocean. A spacecraft will fly by the moon and take measurements using radar and other equipment. If funded, that mission would launch in the 2020s.

That funding is key — and capturing the public's imagination would be a big boost when it comes to getting it. So it's not surprising that Tuesday's discussion ended with this invitation from Dr. Stofan.

"Don't just listen to us, don't just read about it. Come help us discover whether there's life in the solar system and beyond," Stofan said.