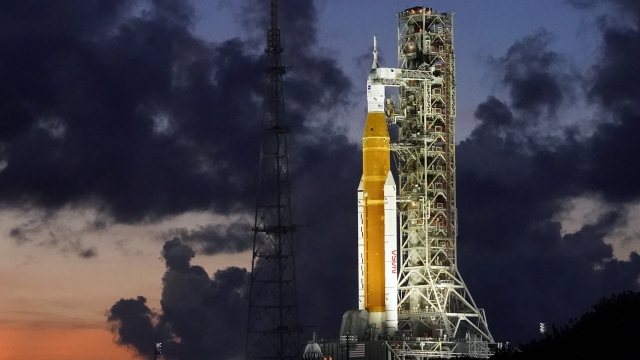 SMS
NASA's Artemis Mission Is Gearing Up To Launch
By John Mone
By John Mone
August 8, 2022
The humans behind the Artemis mission will mark a return to lunar travel in the 21st century.

In Greek mythology, the goddess Artemis is the twin sister of Apollo.

The brother was the namesake for the first crewed missions on the moon more than 50 years ago.

NASA's Johnson Space Center in Houston has immortalized the original mission control into a national monument.

And at a new mission control just steps away, the humans behind the Artemis mission will mark a return to lunar travel in the 21st century.

Debbie Korth is the Orion Program deputy manager at NASA.

"I have three kids, two of which are daughters. And so when I talk to them about 'We're going to send a woman to the moon,' they can't even understand — there hasn't been one? They grow up in an environment where things are just so much more diverse and inclusive," Korth said.

Artemis will carry a crew as diverse as planet Earth.

Reid Wiseman is the chief astronaut at NASA.

"We want every kid in America to look at our poster and say, 'Oh, I see myself in that,'" Wiseman said.

After blasting off, the Orion capsule will carry humans almost 239,000 miles away.

Jasmin Moghbeli could be one of the 10 astronauts picked.

"It's really important to be flexible and to train things to the point where muscle memory kicks in," Moghbeli said. "It's extremely exciting to me the way that we're talking about going to the moon this time and and looking at our office, the astronaut office, and seeing the diverse group of people we have."

So could Victor Glover, another astronaut.

"We have the ability with today's astronaut corps to do it by all people. So I'm just happy to be here right now that that's a capability, a possibility," Glover said.

But first, there's a crucial test.

NASA will show how it will get the Orion capsule to the moon and back without people.

It will also examine the heat shields of the capsule and will put male and female mannequins on board with human tissue mock-ups to test various things like vibration and radiation on the human body.

The launch window starts Aug. 29. The travel time is about six weeks.

NEWSY'S JOHN MONE: What's a refined timeline for when human beings are going back to the moon?

DEBBIE KORTH: The next step will be Artemis 2, which is planned for 2024. So that'll be our crewed mission.

Astronauts and their colleagues on the ground are continuing to train.

Rick LaBrode is the lead flight director on Artemis mission 1.

"We have to learn how to live away from Earth for longer periods of time, because our ultimate goal is obviously to go even further than the moon," LaBrode said.

To prepare for walking on the surface of the moon, astronauts will spend hours underneath the water.

Dominic Del Rosso is the chief engineer of Neutral Buoyancy Lab at NASA.

"Those folks, instead of being completely neutral and being able to go anywhere, they now have to weigh 1/6 of what they weigh here of gravity per person," Del Rosso said.

The Neutral Buoyancy Lab and astronaut training suits are being converted to mimic the moon.

Jackie Kagey is the EVA Gateway and Surface Operations lead at NASA.

"The NBL is one of our best ways to simulate a large area of lunar gravity," Kagey said.

Another method of training is virtual reality. NASA gave reporters the opportunity to walk on the moon in VR, as well as drive a lunar vehicle.

"Gateway is the outpost where crews will go to. They'll do some science and research at Gateway, but then also go to the lunar surface, then come back to Gateway," Fuller said.

The return to the moon, while it's exciting, isn't the ultimate goal.

"I just want everybody in the room and everybody watching to remember our sights are not set on the moon. Our sights are clearly on Mars," said Reid Wiseman.

It will be a new frontier for all humankind to explore.