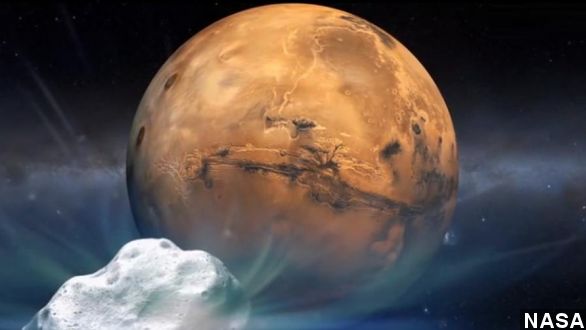 By Evan Thomas
October 10, 2014
Comet Siding Spring will pass within 87,000 miles of Mars — a near miss in celestial terms, and a rare opportunity for nearby NASA probes.
SHOW TRANSCRIPT

NASA is preparing its fleet of research probes to monitor a comet flyby at Mars.

C/2013 A1, or Siding Spring, after the Australian observatory that discovered it, will pass within 87,000 miles of Mars. In celestial terms, that's a very near miss — and a big opportunity for the various science missions NASA has in the neighborhood.

This is the first time Siding Spring has made it into the inner solar system. The comet is the first one from the distant Oort Cloud that human spacecraft have had a chance to study so closely. NASA says it could carry clues about the formation of the early solar system. (Video via NASA)

Thus, NASA plans to turn every sensor it can on the comet. The Mars Reconnaissance Orbiter will examine its size and composition. The newly arrived MAVEN mission will be monitoring Siding Spring's effects on atmosphere. The Curiosity and Opportunity rovers will watch the flyby from the surface.

Siding Spring is humming along at 35 miles a second and going the wrong way — that is, its orbit is roughly "clockwise," compared to the "counterclockwise" paths traced by Mars and the other planets.

NASA has adjusted the orbits of several Mars probes to put them on the far side of the planet during the flyby, just in case. Even trailing dust is dangerous when it's moving that fast.

"The hazard is not an impact of the comet nucleus itself, but the trail of debris coming from it. Mars will be right at the edge of the debris cloud, so it might encounter some of the particles -- or it might not."

Closer to home, NASA will turn the Hubble and STEREO orbital telescopes on Mars; as well as the ground-based infrared observatory on Mauna Kea. It's even used a high-altitude balloon-borne telescope to get early images of Siding Spring as it approaches the orbital plane. (Video via JHU Applied Physics Laboratory)

The flyby itself is about a week away. Siding Spring is expected to be closest to Mars on Oct. 19. NASA says you'll be able to see it from the Southern Hemisphere with the aid of binoculars or a small telescope.