NASA Rang In The New Year With A Historic Flyby 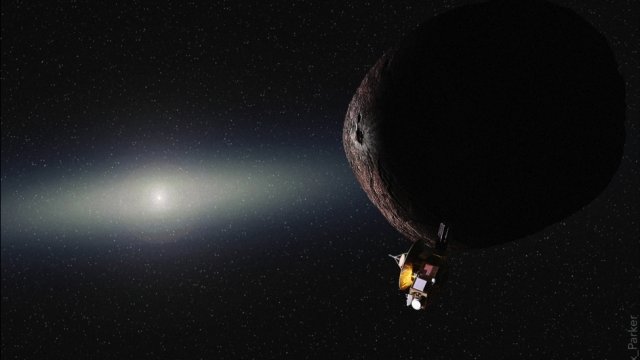 SMS
NASA Rang In The New Year With A Historic Flyby
By Katherine Biek
By Katherine Biek
January 1, 2019
NASA's New Horizons spacecraft whizzed past the most distant object in the solar system ever to be explored.
SHOW TRANSCRIPT

Forget fireworks — NASA rang in the new year by sending one of its spacecraft whizzing past the most distant object in the solar system ever to be explored.

The New Horizons probe zoomed by the object in the Kuiper Belt shortly after midnight Tuesday morning. That object is temporarily nicknamed Ultima Thule, and it's orbiting about 4 billion miles away from the sun.

Because the Kuiper Belt gets so little light from the sun, NASA believes Ultima is a frozen snapshot of what that part of the solar system was like when it was born 4.6 billion years ago.

Astronomers didn't even know Ultima existed before 2014, and Tuesday marked the first time it was viewed up close — though "close" is a relative term, since New Horizons was still about 2,200 miles away on its closest approach to the object.

Data sent back after Tuesday's flyby confirmed Ultima is 20 miles long and is shaped sort of like a bowling pin. But scientists have not yet confirmed if it's one or two objects that are either orbiting around each other or even touching. It's expected to take 20 months for New Horizons to send back all the information it gathered on Ultima.

New Horizons' journey to Ultima is actually its second historic mission. Launched in 2006, the spacecraft became the first ever to fly past the dwarf planet Pluto in 2015.