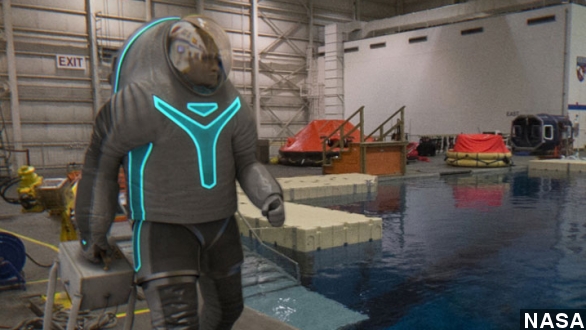 NASA is building a new space suit, and they're crowdsourcing part of the design.

"NASA is allowing internet users to select the overlay for the next spacesuit.  ... Each of the suits can fit over the new prototype Z-2 spacesuit that is being developed, and voting began Monday and will run through April 15."

The new Z-2 suit is a follow up to the Z-1, which Time Magazine named one of the best inventions of 2012.  The Z-1 featured more-flexible joints than previous models, radiation protection, and a hatch on the back of the suit that can dock with spacecrafts and rovers.

NASA is touting the Z-2 as the first surface-specific planetary mobility suit to have a hard upper torso and be tested in full vacuum.  The Z-2 is also the first suit to use 3D-printed hardware for suit development and sizing.

The first design is Biomimicry, which NASA says was inspired by the world's deep oceans.  It mirrors the bioluminescent qualities of many aquatic creatures.  The second is technology, which features wire and light-emitting patches, allowing for easy identification of crew members.  The third and final design is "Trends in Society," which is said to mimic modern sportswear.

NBC reports the hard composite upper torso combined with the suit port that was included in the Z-1 will make the suit more durable for use in environments like the surface of Mars.

Though they note the light-emitting features probably won't make it to the red planet.  That's because they reduce the suit's ability to endure radiation exposure and temperature swings.

The International Business Times says, "The Z-2 spacesuit features three choices that look like something a child would dream up which means it is perfect for the future of space exploration."

To vote on the designs, click the link in the transcript.  NASA plans to have the first prototype ready by November 2014.