NASA Joins Efforts To Save Manatees By Improving Water Quality 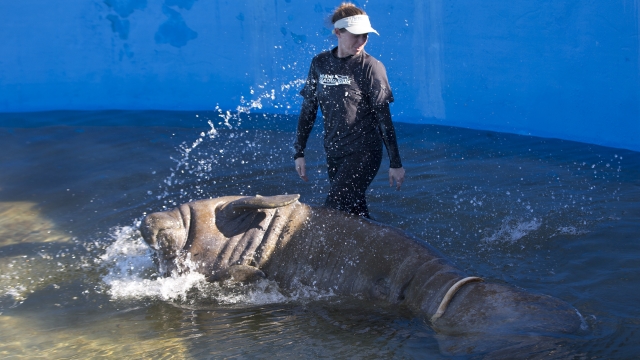 SMS
NASA Joins Efforts To Save Manatees By Improving Water Quality
By Haley Bull
By Haley Bull
January 11, 2022
Researchers believe poor water quality led to algal blooms and a loss of seagrass, cutting off a food source for the manatees.

NASA is known for pushing the limits in outer space, but back on Earth the agency is looking out on the Florida waterways bordering Kennedy Space Center, too.

It's a mission that could help improve water and habitat quality, helping animals in it too, like manatees, birds and sport fish.

"No one's ever seen it this bad. There's pretty much zero seagrass out here at this time, so we've got a lot of work to do," said Jeffrey Collins, who grew up in the area.

Collins is an environmental protection specialist in NASA's environmental management branch. We met him on a road along Banana River Lagoon, where he said there's about a 200-foot zone of black water and around 20-30 feet of shoreline is lost.

"If there's the death by a thousand cuts for the lagoon, this is definitely a few of the cuts — this kind of erosion," Collins said.

Recently, experts have focused on the Indian River Lagoon as a record number of manatee deaths are tracked. Researchers believe poor water quality led to algal blooms and a loss of seagrass, cutting off a food source for the manatees. The manatees may be a symptom of the conditions in the lagoon, though.

The agency came up with the Indian River Lagoon Health Initiative Plan to help understand and improve water and habitat quality.

It's a list of proposed projects to select from as funding becomes available. They include things like muck removal, sport fish monitoring and seagrass mapping.

"The thing is, we've got to stop the blooms, and the best way to do that right now is to reduce nutrients, and that's part of the plan. We will get to the point where we're looking at nutrient discharges throughout the center and if we see that there are issues or things that can be improved on, we'll add those projects to the plan," Collins said.

"Some of the things we've learned about that is the secure area of NASA, which is to the north there, it's an important marine reserve. We have some big fish in there. They hang out in there. Nobody fishes for them. They leave to go spawn and so they repopulate the lagoon with fish, then they come back," said Collins.

The head of the Indian River Lagoon Council said it's great to see NASA looking at the health of waterways, especially as space exploration grows.

"It's a big footprint up there. Merritt National Wildlife Refuge is over 140,000 acres and you've got this launch site in the center there, so it's a unique challenge that has some incredible opportunities to get it right to show how to do it right for the 21st century," said IRL Council executive director Duane De Freese.

De Freese also said the long-term solution is reducing things like waste and storm water, though notes in 2021 there was a reprieve in water clarity.

"When we get into these drought periods and we don't have heavy rainfall — which brings storm water and groundwater nutrients into the lagoon — this year, for the first time in a while — really years — we didn't see an intense harmful algal bloom," he said.

Turning the tide isn't a quick fix, but it's one experts are committed to. 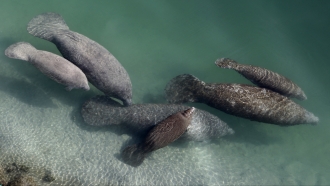