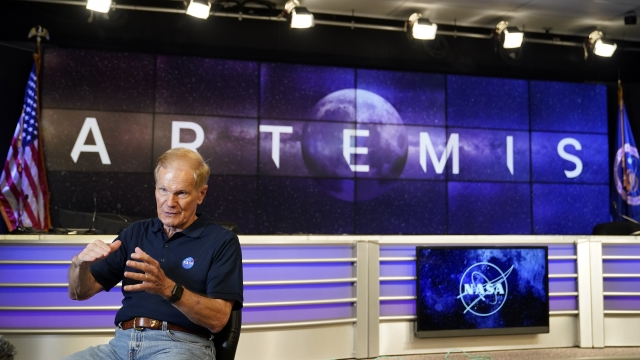 If all goes to plan, Artemis 1 will be on its way to the moon before August ends.

The most powerful rocket ever built is ready for a Monday morning liftoff from Kennedy Space Center in Florida.

"You can feel the excitement, the energy increase, and it's really really palpable," said Janet Petro, Kennedy Space Center director.

At the top of the massive SLS rocket sits the Orion capsule. It can hold four astronauts, but for this test flight, it will carry a few mannequin stand-ins instead of people.

"This is the first human class mission in over 50 years, so we're doing something that is incredibly difficult to do and does carry inherent risk in it," said Mike Sarafin, Artemis 1 mission manager.

The mission will send the capsule on a 42-day journey around the moon and back to Earth. Tiny cube satellites will also hitch a ride; one will look for water ice on the lunar surface.

Artemis 1 is laying the groundwork not just for humans to go back to the moon, but to eventually go beyond.

"It's a future where NASA will land the first woman and the first person of color on the moon," said Bill Nelson, NASA administrator. "Astronauts will live and work in deep space and will develop the science and technology to send the first humans to Mars."

One of the big tests for Artemis will be the heat shield. It has to protect the capsule traveling 25,000 miles an hour from scorching temperatures up to 5,000 degrees.

"It's a test that we can't duplicate on the ground," said Chris Cianciola, SLS program deputy manager. "We've tried our best with all environments we have, but this is the reason we fly: to fully understand the vehicle."

Getting to space is expensive. The Artemis 1 mission will cost more than $4 billion. The price tag for the entire program is $93 billion.

"I'm a product of the Apollo generation, and look what it did for us," said Bob Cabana, NASA associate administrator. "I cannot wait to see what comes from the Artemis generation because I think it's gonna inspire even more than Apollo did."