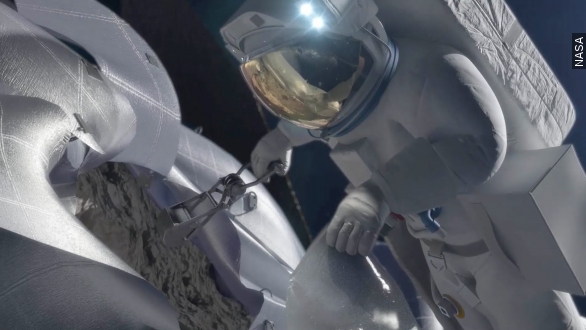 SMS
NASA Gives New Details On Upcoming Manned Asteroid Mission
By Steven Sparkman
By Steven Sparkman
March 25, 2015
On Wednesday, NASA announced its Asteroid Redirect Mission will begin in 2020 and gave new details about how it plans to snag a space rock.
SHOW TRANSCRIPT

NASA announced new details Wednesday in its mission to send humans to an asteroid.

The agency says its Asteroid Redirect Mission is set to begin in 2020, with the phase involving astronauts scheduled to follow five to six years later.

NASA is touting the mission as a test of its capabilities, setting it up as a stepping stone on the way to a manned Mars mission. It's a goal President Obama has been pushing for years.

"We are setting a course with specific and achievable milestones. ... We’ll start by sending astronauts to an asteroid for the first time in history," Obama said in 2010.

In its final form, the plan sounds more like bringing an asteroid to the astronauts. Phase one will send a robot to snag an asteroid and haul it back closer to Earth, and phase two is the manned mission to fly out and study it. (Video via NASA)

Until Wednesday, we weren't sure what the robotic phase would look like. One plan involved essentially wrapping a smaller asteroid up in a big container and towing it closer to Earth.

The other plan involved sending a spacecraft to retrieve a boulder from the surface of a larger asteroid using a giant arm. That's the idea NASA ultimately decided to pursue.

We already have a good idea what the human phase of the mission will look like, though. The agency tested its Orion spacecraft late last year, demonstrating that it can carry humans farther from Earth than ever before, including to a nearby asteroid.