The Discovery Of A Flat, Dead Galaxy Is Changing NASA's Outlook 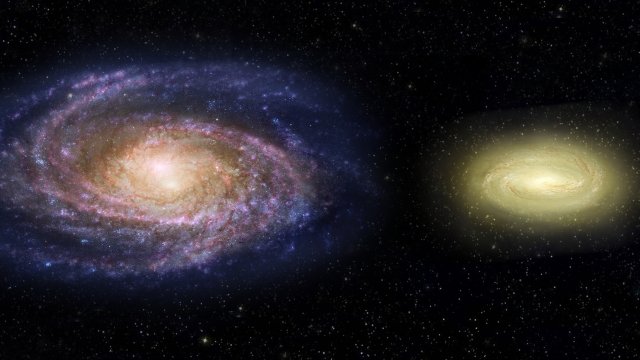 SMS
The Discovery Of A Flat, Dead Galaxy Is Changing NASA's Outlook
By Ryan Biek
By Ryan Biek
June 22, 2017
NASA previously thought the universe's oldest dead galaxies were ellipticals, but this discovery is evidence of galactic evolution.
SHOW TRANSCRIPT

The discovery of an old, dead galaxy is changing how NASA thinks about evolution in space.

What NASA is really interested in is their shape and color.

For shapes, we're comparing elliptical and spiral. Elliptical galaxies are frenzied spheres, while spiral galaxies, like our Milky Way, are ordered and flat.

Looking at color, blue stars are younger. Because spiral galaxies are normally blue, scientists have thought those galaxies also are younger.

NASA believed all the earliest dead galaxies were elliptical.

But the Hubble Telescope just discovered an ancient dead galaxy shaped like a spiral but without the usual blue color.

This is the first time NASA has seen a dead galaxy with a spiral shape. That led experts to believe other dead galaxies could have started out as spirals and later evolved into giant ellipses.

How could that evolution happen? NASA thinks collisions are to blame.

When galaxies merge, they likely come together at different angles. This affects the paths stars take, creating the random orbits elliptical galaxies are known for.