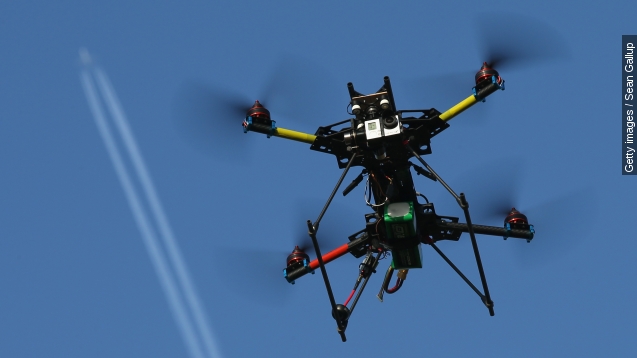 SMS
NASA Could Soon Borrow Cell Towers To Track Drones
By Evan Thomas
By Evan Thomas
June 4, 2015
NASA and Verizon are investigating if commercial cellular towers could be used to regulate the swarm of civilian and commercial drones in the U.S.
SHOW TRANSCRIPT

All these drones in the air might one day be brought to you by Verizon.

The Guardian obtained documents that say NASA is working with Verizon "to jointly explore whether cell towers … could support communications and surveillance of unmanned aerial systems at low altitudes."

In other words, they're investigating whether wireless carrier towers could act as an air traffic control net as an alternative to sending more flights through an already saturated federal ATC. (Video via NASA)

The system would track drone location, prevent flights over sensitive areas such as the White House, automatically ground drones in bad weather and sort out which drones get priority in the event the airspace gets too congested. (Video via CNN, Montgomery County Community College)

Google and Amazon are supporting the project as well, albeit a bit differently. The Guardian reports Google will share data from its Project Wing initiative, and Amazon will be testing its drones in the air at NASA’s Ames research center. (Video via Google, Amazon)

Whether this commercial partnership will get off the ground remains to be seen. NASA — and the U.S. government as a whole — are still trying to hammer out exactly how to regulate clouds of new drones. (Video via Audi)

In 2014, NASA started looking for partners who could help manage unmanned airspace. (Video via Newsy)

It's not clear if or how a partnership with Verizon would fit into its existing plans, but there are some suggestions it comes down to money. (Video via NASA)

These days NASA really doesn't have much wiggle room in its budget. Fast Company points out that might be why it's partnering with the corporate sector in the first place: because it's cheaper. (Video via Newsy)

Meanwhile, the FAA has rules regulating civilian drone use but still hasn't come down on how it wants commercial flights to behave. (Video via the Federal Aviation Administration)

Its notice of proposed rulemaking for commercial UAS flights closed in April. A final version is expected to be in place around September. Until then, existing rules apply, which is to say commercial drone flights are more or less restricted to a handful of special permit holders.

NASA-Verizon tests could start in 2017. Verizon reportedly hopes to put the finishing touches on the system by 2019.