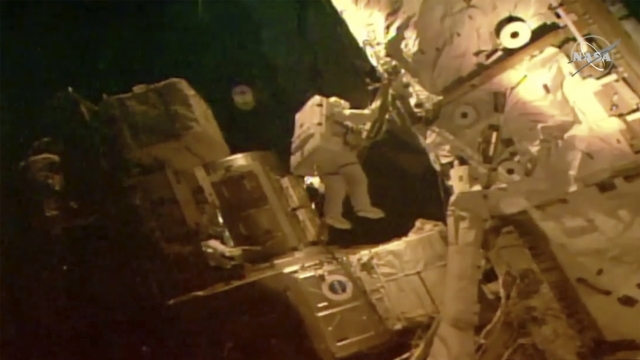 Two U.S. astronauts completed NASA's 300th spacewalk on Tuesday, venturing outside of the International Space Station some 200 miles above the Earth at around 17,000 miles per hour.

During the 5 1/2-hour excursion, astronauts Chris Cassidy and Robert Behnken performed a variety of maintenance tasks including installing a robotics tool storage chest, as well as readying the U.S. Tranquility module for a new commercial airlock to be installed later this year.

Tuesday's spacewalk was the pair's fourth and final spacewalk in less than a month, and the 10th in their respective careers. This puts them in a tie for the most spacewalks conducted by Americans.

Behnken was one of the astronauts aboard the SpaceX Crew Dragon spacecraft, which successfully launched out of Florida in late May. With Tuesday's spacewalk complete, Behnken, along with astronaut Doug Hurley, are set to depart the International Space Station on Aug. 1. If everything goes according to plan, the SpaceX capsule will splash down off the Florida coast the following day, making it the first manned splashdown in 45 years.