NASA Announces Strongest Evidence Yet Of Water On Mars 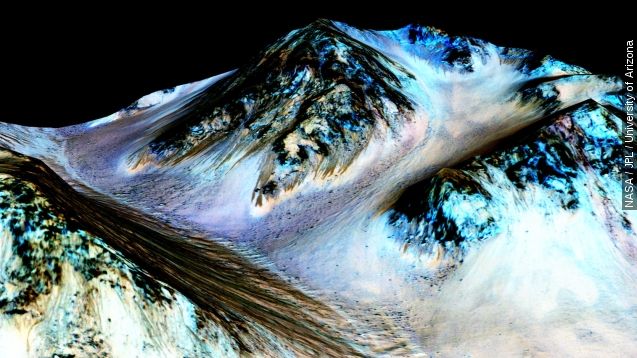 "Mars is not the dry, arid planet that we thought of in the past," said Jim Green, NASA planetary science director.

NASA's big announcement Monday about what it found on Mars wasn't aliens like we all hoped — even though we knew it wouldn't be.

The "major science finding" it had to share was the strongest evidence yet that liquid water intermittently flows on Mars, just below the surface.

Scientists already had suspicions after discovering some interesting streaks on Mars. They used a spectrometer to look at the streaks and found the minerals there were hydrated and that water played a vital role in the streaking.

We were clued in that NASA wasn't going to be talking about aliens when it was announced that mostly planetary scientists and geophysics grad students were giving the talk, which meant it was likely about Mars' surface or structure.

Who would you even get to talk about first contact, anyway? Someone from the U.N.? Cpt. Picard? (Video via Paramount Pictures)

But our dreams of alien life aren't totally dead. Water means there's a better chance of life on the planet. Well, some form of it. Don't expect to find a space kitten.

NASA tailors its exploration missions to hunt for H2O because its presence is one of the building blocks required to support life as we might recognize it here on Earth. (Video via NASA)

Another is organic matter. NASA has already found that on Mars, specifically some variants of methane. (Video via NASA)

It's still not microbial life, though, and NASA makes sure to knock down such rumors whenever they crop up.

This video includes images from Getty Images and NASA and music from Birocratic / CC BY 3.0 and The U.S. Air Force Band.