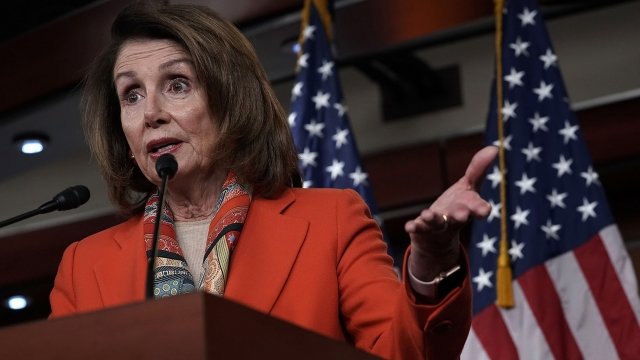 SMS
Pelosi Says She'll Run For Speaker Again If Democrats Retake House
By Ethan Weston
By Ethan Weston
May 2, 2018
She told the Boston Globe it's "important that it not be five white guys at the table" when Congress and the White House negotiate.
SHOW TRANSCRIPT

Nancy Pelosi seems to be feeling pretty confident about Democrats' chances of taking back the House of Representatives in November. And she says she wants to run for speaker if that happens.

Pelosi told the Boston Globe, "We will win." She also said it's "important that it not be five white guys at the table" when Congress and the White House negotiate.

Pelosi has held the speaker's gavel before — but if she runs for the spot again, it might be a tougher fight.

There's an undercurrent of anti-Pelosi sentiment within parts of the Democratic Party. Republicans are also using Pelosi as an anti-Democrat talking point in swing districts.

Plus, it's likely going to be a highly competitive election season.

But even if some Democrats are trying to distance themselves from Pelosi, it's not really clear who might challenge her for the position of speaker. Pelosi was originally elected speaker of the House in 2007.