Couples Are Creating New Last Names Instead Of Adopting One 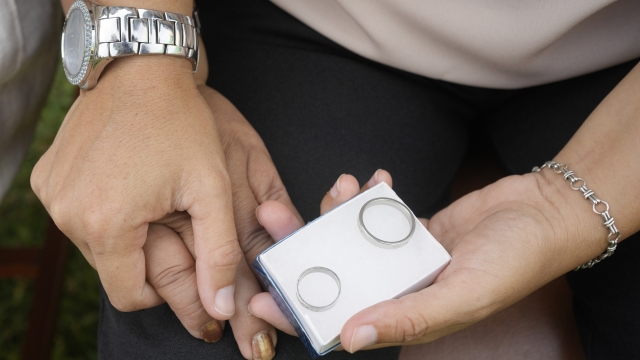 Hi! My name is Casey Mendoza, and in basically all my stories I say my name at the end.

But we're doing something a little different today because my last name is changing.

I got married last year, and like many other newly married people, I decided on changing my last name. Both my husband and I are changing our last names to one we completely made up: "Coda."

Now before I answer the question, "Wait, you can do that?" I should probably clarify that professionally I am keeping my last name, but the decision we made to create a new last name isn't a common one. Even my husband's decision to change his last name is rare — just 3% do according to a 2018 survey from the Journal of Family Issues.

That's why there is no male equivalent for the phrase "maiden name."

But while the norm for heterosexual couples in the U.S. is still for women to take on their husband's last names, nontraditional decisions like ours are happening more.

In cultures around the world — including Peru, where Giomar Silva is from — women typically add their husband's last names to their own.

"I decided to just tack on 'de Silva' much like Gio's mom, because like all my degrees have my name on it," Meredith Mackenzie de Silva said. "I’ve done a lot of things with that name, and so I like the idea of belonging to the Silva family, but without taking out my last name."

Think of it as similar to hyphenated or double surnames in the U.S. — though Gio and Meredith's children will just have the last name Silva, and unofficially, the family came up with another blended name.

"For fun, we do a combination of our last names, which is 'MacSilva,'" Meredith said. "That's our official family seal in the Christmas cards. We have a doormat that says, 'Welcome to the MacSilvas.'"

While chatting with the "MacSilvas" about last names, there was a topic that kept coming up: this idea of individual and family identities and what it means to combine the two but still respect the former.

As someone who has a name that is published professionally, that's something that I thought about a lot.

Around 22% of women who were married in the 2010s kept their last name after they got married, and most of them are highly educated, high-earning and established in their careers.

For a while I thought I would be included in this group of women, but I also wanted to have the same last name as my husband and any future kids we might have.

Hannah Malone and her husband both changed their last names after they got married.

"I came from a really large family, and we're both ready to have our own identities," Malone said. "We were just kind of like, 'What if make our own last name and pick a new one?'"

Malone, believe it or not, was based on an inside joke referencing the 1976 gangster movie "Bugsy Malone."

"It It was just his casual nickname that was, like, in the small group of friends that we had, and we just laughed about it for so long," Malone said. "We were like, 'Let's do that.'"

Beyond heterosexual couples, research from The Knot found that a little less than half of married LGBTQ+ couples make the decision to choose one partner's last name.

Others keep their names, hyphenate or also create new ones, and one couple explained to the outlet: "We wanted to be unified as a family, and we wanted it to represent both of us."

The Knot calls this a new tradition among young couples, but it's not easy.

Though the process varies by state, completely new last names oftentimes have to go through extra court approval and more paperwork. It's a process we're actually still going through, and again, we got married in November.

But someday soon, I will officially be Casey Coda. And on-air and professionally, I will always be Casey Mendoza.