Naloxone Saves Lives, But Does It Also Enable Opioid Addiction? 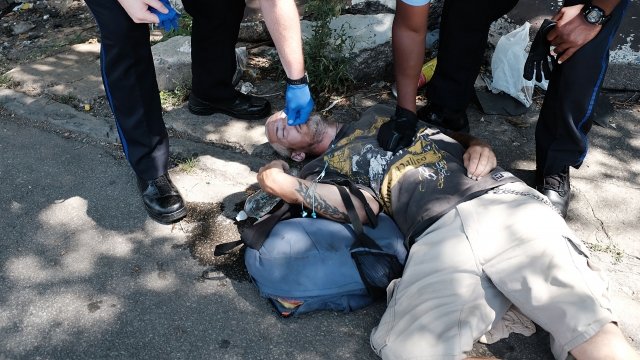 SMS
Naloxone Saves Lives, But Does It Also Enable Opioid Addiction?
By Cat Sandoval
By Cat Sandoval
April 9, 2018
Naloxone, often referred to by the brand name Narcan, is an emergency treatment for opioid overdose, but it doesn't cure the addiction to drugs.
SHOW TRANSCRIPT

Naloxone, better known by the brand name Narcan, is a quick fix for opioid overdoses. But some say it can lead to a revolving door of addiction.

"One thing that I absolutely want to do is get naloxone in the hands of more people and help folks understand that it can save lives," U.S. Surgeon General Dr. Jerome Adams said.

Last week, the U.S. surgeon general put out an advisory to encourage more Americans to carry naloxone because of its immediate, life-saving effects. Walgreens announced last year it would carry Narcan nasal spray in all of its 8,000 pharmacies nationwide. In most areas, emergency health workers and police already carry the drug.

But some first responders say it enables drug addiction. In Dayton, Ohio, police have revived one overdose patient 20 times. Due to repeat offenders in Middletown, Ohio, the city is considering limiting Narcan resuscitations to two per person. In emergency situations, the city, like other municipalities in the U.S., takes the brunt of costs for the product.

Last year, the senior adviser to Maine's governor said, "The governor believes that unlimited free doses of naloxone produces a sense of normalcy and security around heroin use."

Gov. Paul LePage wrote, "Naloxone does not truly save lives; it merely extends them until the next overdose ... only to perpetuate the cycle of addiction."

Naloxone is not a cure-all for opioid addiction. It brings people back to life after an overdose. And while naloxone is credited with saving lives, health professionals say the key to stopping the cycle is treatment and rehabilitation.

"We want to connect people to treatment; we don't want to keep just resuscitating them."  Surgeon General Adams said. "We want to have bridges to treatments."